The aim of the project was to bring to the trail the same technology used in our running shoes; sheets of carbon embedded in the soles, which can enhance the elastic response, accelerate the gait and even break world speed records. To prove that the results were also positive in the mountains, we relied on an eminent laboratory connected with the University of Bologna, which developed a series of strength tests. Prior to this study, there was no scientific literature examining the effects of carbon shoes on trail running performance.

Three tests were conducted, two of which compared a shoe with carbon and one without. Starting with an incline of 9%, the slope increased by 2% every 3 minutes, until the maximum effort was reached. And from the outset, the scientific ‘blind’ testing (with and without the carbon plate) showed that on average, at the same slope and speed, the shoe with the carbon fibre resulted in a saving of 2.1% of oxygen consumed. This means the athletes were saving 2.1% of energy. 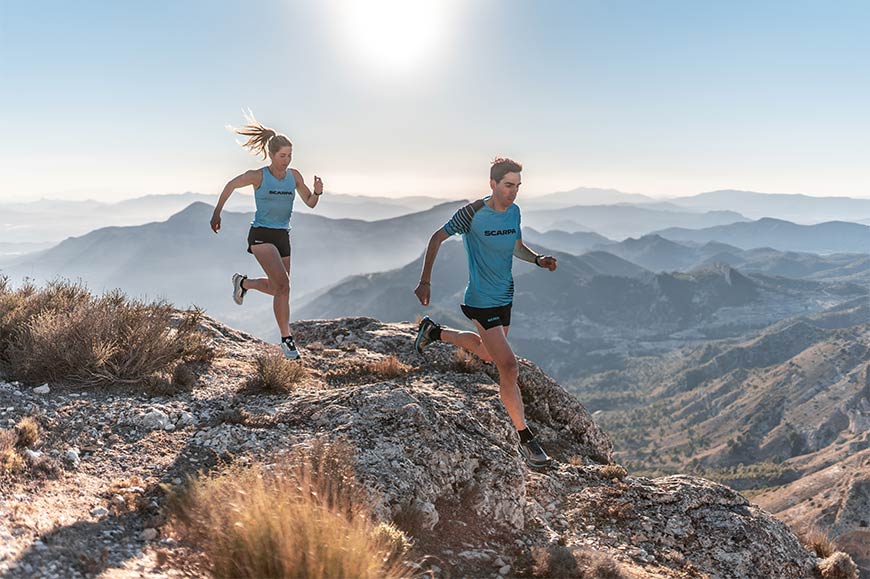 But the real challenge came later: we had to design a plate that was not too rigid on the ball of the foot, but able to adjust to uneven footholds on rocks or tree roots. In fact, due to the ruggedness of these trails, the foot sometimes rests on the inner edge, sometimes the outer. We therefore decided to make a carbon plate in the shape of a V, patented and able to adapt to uneven terrain.
Having completed this carbon revolution, the rest consisted of corollaries resulting from the latest innovations. Improved grip in the ball area for dry terrain; on the heel we added materials suitable for wet terrain, perfect for braking on descents. We also added a feature at the back of the collar: a soft section that almost embraces the Achilles tendon and gives a feeling of protection on the descent.
Other features include the compounds and technical details of the upper, and the sock-fit system, a kind of inner sock that ensures total comfort. Completing our work are the abrasion-resistant mesh and protective films, the small window that shows the carbon plate and the truly resistant nature of this product. 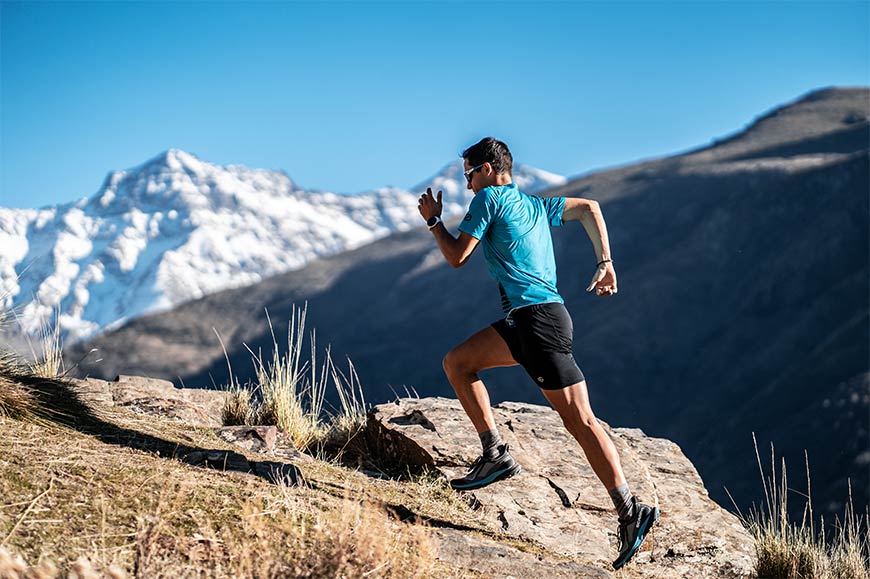 The Golden Gate Kima RT guarantees a highly technical fit for professional athletes but is also suitable for amateurs wishing to try the top technologies available.

And it’s more than just words. In testing, the Golden Gate Kima RT has already achieved two Fastest Known Times on the feet of Spanish runner Manuel Merillas, one of our best athletes. Merillas successfully conquered the White Lady: 49.6 kilometres with a positive (and negative) height difference of 3,750 metres, from Courmayeur to the summit of Mont Blanc and back. He did it in 6h35’32”, knocking more than 8 minutes off De Gasperi’s previous record. What’s more, Merillas’ Golden Gate Kimas also took him to the top of Monte Rosa: he flew up and down the mountain (2,900 metres’ ascent over 31 kilometres) in 3h59’18”, more than half an hour faster than the previous record-holder, Franco Collè.

The shoes every trail runner was dreaming of really do exist.