THE HIGHEST RACE IN EUROPE

After two editions of great success and the year of stop caused by the pandemic, the Monte Rosa SkyMarathon is ready to start again on June 19 in Alagna Valsesia (in the province of Vercelli): athletes from 39 countries around the world have already registered and will compete on a 35-kilometre route with an infinite wall of about seven thousand meters of total elevation gain. The race is in pairs (a maximum of 250 athletes will be able to register), all athletes must be tied up for safety and equipped with crampons for the segments on the glacier, that from Piedmont cross the territory of Gressoney La Trinité, in the province of Aosta, and then in Switzerland before reaching Capanna Margherita at 4.554 meters, in the middle of the clouds, and then finally diving back into the valley.

Alongside the queen race is AMA VK2, the double Vertical Kilometer® introduced in 2019: the perfect opportunity to get a taste of Monte Rosa. The race starts in Alagna and arrives at the Indren Station at 3,260 meters. Nine kilometres, with a total of 2,086 meters of elevation gain all uphill for a leg-burning race that nevertheless allows everyone to touch the sky. There are only 300 places available to comply with the anti-Covid rules, some of which are already occupied by the members of 2020. For the last edition of the two races (later cancelled) 800 athletes from 33 different nations registered, this year the nationalities have increased confirming that the race is increasingly popular and well known. 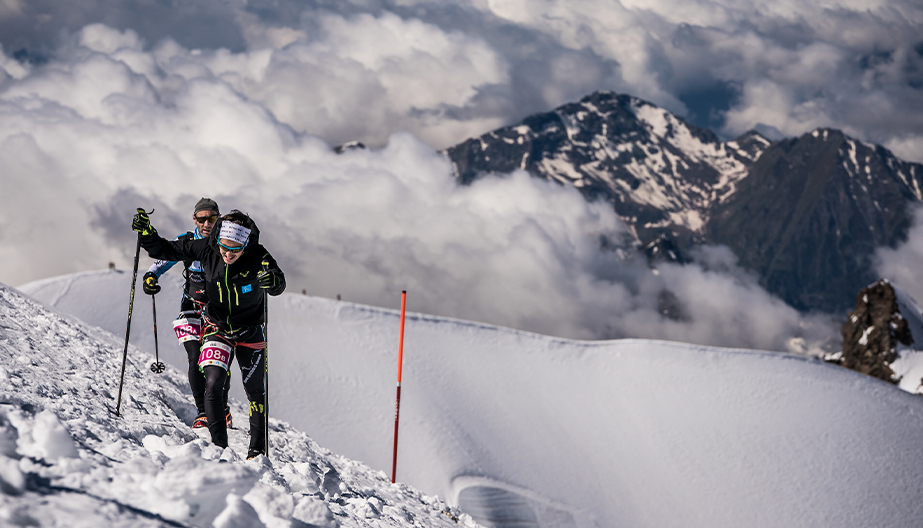 ​​​​​​​
A challenge that respects the founding values of SCARPA. In fact, it perfectly embodies the original concept from which skyrunning was born, which wants high altitude, the top of the mountain and the return; it wants glaciers and snowfields, but also steep and technical terrain. For this reason, SCARPA, a world leader in high-performance footwear, is a partner of the Monte Rosa SkyMarathon.

The skyrunning legend, the six-time world champion Marco De Gasperi, now brand manager for SCARPA, commented in this way the agreement of a race that is also emotionally important for him: in fact, here he started his career, at the age of 17, participating with the "signature" of his father, and coming tenth. "SCARPA is proud to get a partnership off the ground with the race that absolutely represents the emblem and origins of skyrunning," he said. "Our company's goal is to grow in the trail running industry and by tying ourselves to events like the Monte Rosa SkyMarathon we are going in this direction. It will be a great race, I'm sure."

For information and registration: www.monterosaskymarathon.com