The "Tre Cime Experience" sky marathon: some advice from one who has already run in it

On the highest peaks you realize that snow, the sky and gold have the same value. Boris Vian’s words are the perfect description of those 2-3 precarious, yet solid inches of rock stretching to the clouds over Misurina.

The Three Peaks of Lavaredo is the backdrop for the most anticipated alpine running race of the Dolomites, the Misurina Sky Marathon scheduled for 9 September. Its 43 kilometres and elevation gain of 3000 metres make for an unforgettable race. The itinerary is spectacular. Here are some of the highlights: once you’ve passed the Col De Varda Shelter, there are some war remains and a splendid view on the Marmarole and Cristallo Mountains all the way to Vallandro Peak and the Three Peaks. After having reached the Città di Carpi Shelter and crossed the Cardini with its many passes and drops followed by the ascent to the Auronzo Shelter, then the time has come to tear along to the Pian di Cengia, the Locatelli and the Grava Longa alpine farm. It’s about half as long as the Cadini Sky Race but the beauty of its trails are the same. We’re talking about twenty kilometres with an elevation gain of 1600 metres that includes the Sabbiosa pass followed by the Fonda Savio Shelter and then the final drop to Misurina.

43-year old Massimo Pellizzer, product manager for SCARPA®, has already run the first two editions of the “long” race and the following year he opted for the shorter one. We asked him about what happens in the six, seven or even ten hours of running in the cruel paradise known as the Dolomites.

The first thoughts go to your last attendance, there was a crazy flood. Clouds were over the summits. How did it go?
“It’s never easy in the mountains when it rains. The Misurina Tre Cime Experience takes place at the time of year when the risk of a drop in temperature is high. It was an adventure! And nothing can compare to the satisfaction of finishing a trail notwithstanding the rain”.

Any advice for runners, should they find the same weather conditions?
“Better to bring along a heavier windbreaker just in case. I’ll be running the marathon. I’ve no expectations of winning and I think it will probably take me about eight hours to complete. As you gain altitude, the weather is freezing so it’s always of the utmost importance to have the right equipment with you”.

Aside from the bad weather, what really stays with you after the Tre Cime Experience?
“The turning point is at the Auronzo Shelter. Then you’re halfway. You get there after a really tough ascent. That’s a great moment but it can be discouraging at times. You see it in the distance, this tiny speck way at the top and you feel like you’ll never get there. Then there is a detour in the trail and it feels like you’re going in the opposite direction. Once you finally get there, though, it’s magnificent”. 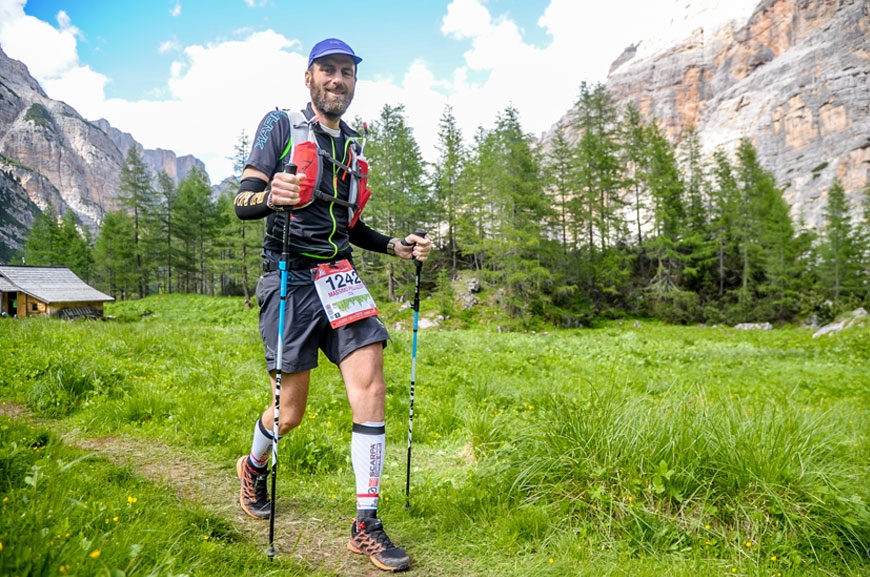 Right after that, there’s the challenging climb towards Pian di Cengia. What happens up there?
“You feel out of touch with the world. You can see the lake in the distance surrounded by nothing except trails and rocky walls. It’s the highest point of the race. You’re practically in the sky. That alone makes the efforts of the entire day worth it!”

And then you tear along to the Locatelli and the Three Peaks. Is that pretty much it?
“You do have this feeling of freedom, actually. I remember that I felt more relaxed because then there is the descent. I felt better mentally and I could already picture the finish line. It’s better if it doesn’t rain at this point. If the sun is out, those landscapes are pretty incredible”.

You have also run the past two editions of the LUT. You really must love challenges in the mountains. What is your take on this kind of race?
“You definitely have to train for it and it might be a good idea to try the route before so you have an idea of the type of walls you’re going to have to face. The 3000 metre elevation gain in a place like the Dolomites isn’t easy at all. The trails are very technical and the landscapes are rough. But spending an entire day in these surroundings makes all the effort worth it. I’ll see you at Misurina. I run it every year. And now I think you understand why”.