18th of July 2015, Stefi and I are standing on the easily accessible summit of Cresta di Davoi, drinking in the wonderful view. Alto Adige to the west. Val di Fassa to the east, a place I temporarily call home. Sticking up into the sky between these is the Catinaccio, Rosengarten in German, and as our eyes take in the impressive East Face we think back to last year, to our first new route together, to the cold, to the mutual enjoyment. "It doesn’t look so big from here" says Stefi… we laugh. The route we have just climbed is technically the hardest of the trio, but the shortest in length.

7th May 2014 - Our Baptism of Fire started with us skinning up through a deserted Gardeccia and onwards to the foot of the eye-catching Catinaccio East Face. Here we erected a tent. We could have overnighted in the Vajolet winter room, but the next morning that would have required a short ski down followed by a tedious uphill traverse on frozen snow… 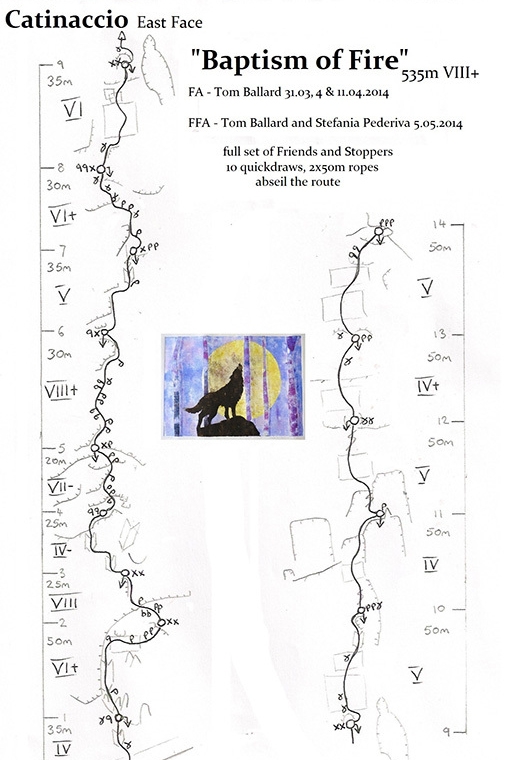 The night was cold, much colder than I had anticipated when packing my lightweight sleeping bag! The early morning sun brought some welcome warmth to us both. Then we began to climb. I heard a shout and looked around to see a nearby hilltop abound with policemen! Their guide, Germano Rasom, seeing someone climbing on the otherwise empty walls and assuming correctly it was a solitary Englishman (this time accompanied by an Italian), called to us in greeting.

Ever since the first day that we climbed together I had been planning on starting this new line, however going climbing in San Nicolò with Stefania Pederiva was an offer I hadn’t been able to refuse!

Immediately I began to think of it as ‘our’ route and I wanted her to accompany me on the first free ascent. So we limbed a number of routes together, mostly on the convenient Piz Ciavazes. I then asked her if she would like to accompany me on this route. She warily said yes. I tried to avoid mentioning the bad rock on the first pitches (I had cut my ropes here), and the traverse. Let’s say that Stefi prefers to climb up, rather than across! How wonderful for me to have a companion to share the feeling of satisfaction at doing something new. Especially someone so pretty! 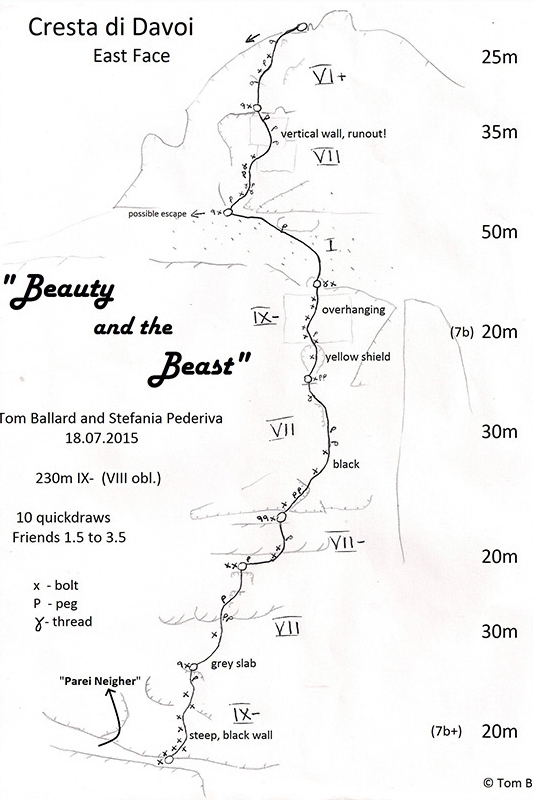 In the end it was a great success. When we reached the top of the route the sun had already gone to shine on other faces, so it became very cold as we climbed the last pitches and descended by abseil. She had become the fourth generation in the Pederiva family to have made a first ascent in the Catinaccio!

8th June 2014 - Marco Desilvestro very kindly gave us a lift up there, we hardly had to expend any energy to gain the base of the climb. A start in complete contrast to how I had been putting up this route, traveling to the wall from Pera by bike. I climbed from the ground up, initially not wanting to use bolts, but after several falls when dodgy hooks decided to ping off…I brought up my drill. After I had climbed all the pitches came the job of cleaning the route and trying to fathom out the moves. At this stage I was walking up the Gartl and behind Punta Emma to access the top of the route, crossing steep snow and wet rock scrambling: I didn’t have enough rope to leave fixed from bottom to top! And then there was one morning when I directed a pair of lost Americans towards their goal: Spigolo Delago, for once empty of people! 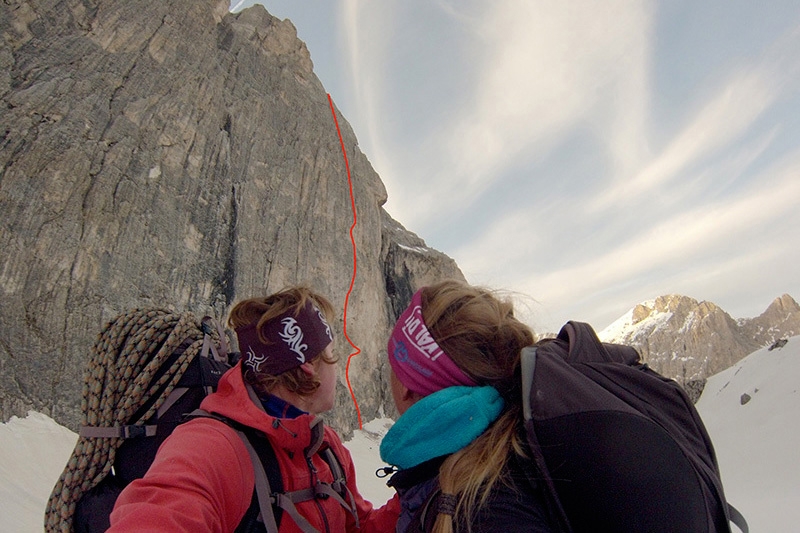 We waited a little while until the sun began to lick the face. The day was very warm, a complete contrast to the last time. I was climbing shirtless! My father made the long walk up to take some pictures of us. Scarlet Fever became our second route… hopefully the second of many…

Fast forward back to 2015, to Beauty and the Beast. We were both quite sweaty by the time we arrived at the foot of the route, having walked in from Muncion. The first pitch has the hardest moves. Small holds, technical, complex movements on perfect rock. I took a tumble during my first attempt when a crimp exploded! Perfect rock? Well, almost!
The following three pitches are more laid back, with a few difficult moves thrown in to spice things up. Then suddenly it gets steep. The fifth rope length is very overhanging, but like the first pitch, fully bolted, not to sport standards though! After an easy but loose walk the penultimate pitch is reached. Runout climbing on a vertical wall, quite a contrast. The sun of course had left us, but at the top we were able to strip off again and lay on the grass during the descent, with a job well done in our contented minds. 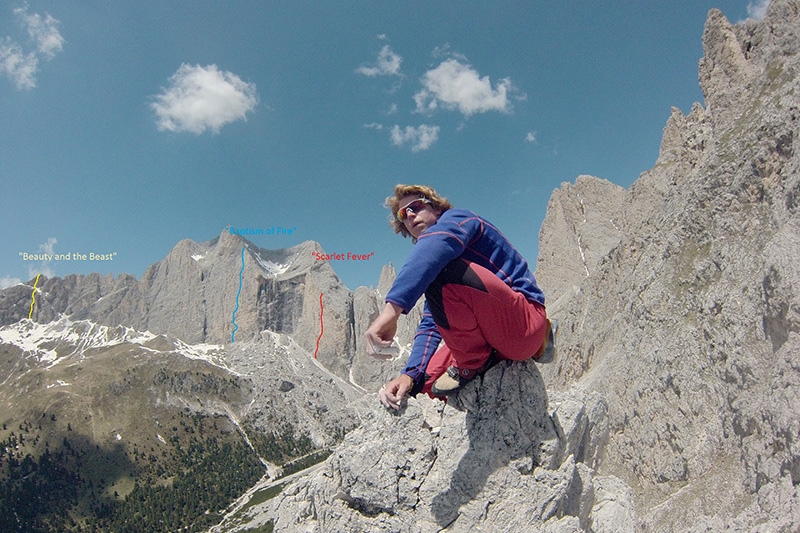 During this winter Stefi had asked me why I wasn’t climbing the six south faces and, basking there in the sun’s warmth, I thought she had a point!