First victory of the season for Sean McColl with DRAGO

The Drago won its first podium accolade last weekend at the CWIF bouldering competition held in Sheffield, England, with Scarpa’s Sean McColl taking the crown in the men’s final.
The Climbing Works International Festival, CWIF for short, was celebrating its 10th year and was bigger and better than ever before. Tickets for the final and entrance places to compete at the event were all snapped up prior to the event.

Each year, competition hosts, the Climbing Works put together an international WAD team of athletes, bringing together some of the biggest names in the world of bouldering to form a team of 4 competitors. This year one of Scarpa’s newest athletes Sean McColl was invited along to join the team, fortunately Sean was free to attend the event and made the trip over from Canada to the UK’s biggest bouldering competition.
Scarpa UK have supported the CWIF since the inaugural event in 2006 and each year put forward a group of UK athletes for the team competition. This year; Michaela Tracy, Dave Barrans, Nathan Philips and Adam Watson were a part of that and finished 2nd overall in the team competition, only being beaten by the super pro WAD team.
After the first qualification round on the Saturday morning Sean had certainly set the standard to beat, scoring 297 overall and placing him in the lead going through to the semi-finals. All 4 members of team Scarpa qualified for the semis with Dave Barrans 4th in the men’s group and Michaela Tracy 3rd in the women’s.

The CWIF has a great vibe about it and manages to get a nice balance of a serious competition but with a fun side as well. The evening qualifying round saw many imaginative fancy dress outfits with everyone trying out the 30 problems around the wall, along with a few specially set ‘off piste’ problems.
Sunday saw the top 20 men and women head on to the semi-finals. The format is the same as a world cup competition with 4 problems each for the male and female competitors. The 6 strongest men and women then progress into the evening final. Some of the country’s top route setters provided a fantastic set of problems throughout the CWIF which challenged even the best athletes. 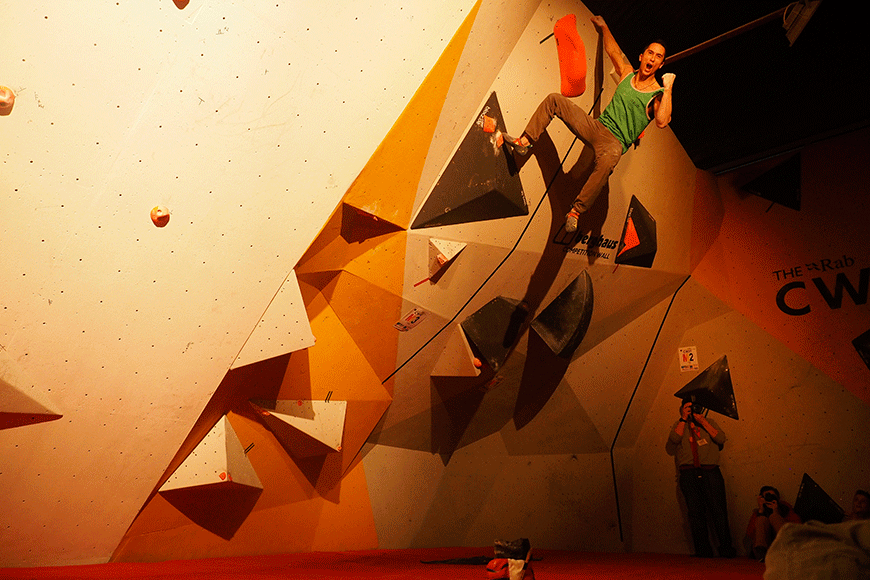 After the semi-final problems Sean headed into the finals in 2nd place, just behind Jorg Verhoeven. Wearing his Drago’s throughout the final Sean showed great, strength and prowess, topping 3 of the 4 problems.
It was problem 3 which was probably the stand out of the night. A route heavily reliant on flexibility and precise footwork on sloping volumes. With only one second left on the clock Sean pulled on for one last attempt of the challenging formation. He went on to provide a spectacular bouldering masterclass, with the commentators astounded by his last minute effort. The Drago held up to the challenge and Sean matched the top hold with rapturous applause from the crowd.

In the end Sean finished up 5 points ahead of his nearest component, Rustam Gelmanov, taking the 2016 CWIF title comfortably.

credits for the pics: Band Of Birds