We are all safely back home after our adventures in Thagas Valley, Pakistan...

Belgian climber Nicolas Favresse provides details about the climbing expedition to the little-known Thagas Valley, Karakorum, Pakistan together with Mathieu Maynadier, Carlitos Molina and Jean-Louis Wertz. Two virgin 6000ers were climbed, while Maynadier was struck by rockfall and airlifted to safety.

We are all safely back home after our adventures in Thagas Valley, Pakistan. It was another magical adventure although you probably heard that Mathieu was hit by a rock fall and had to be evacuated from our basecamp by helicopter. After all medical checks, we are relieved to find out that Mathieu pulled it off with just severe concussion, 2 small bone fractures in his right elbow and a slight vertebra fracture. Considering the circumstances of the accident, he is really lucky. His recovery is going well and according to the doctors he should be back to action by November.

The day of the accident was our 6th day of climbing on the impressive unclimbed spire just in front of our camp. We were making a push and were finally unleashed from our portaledges and fixed ropes, going to the summit. It was a magical day with perfect weather and fun pitches of moderate terrain spiced up occasionally with some sections of ice, snow and loose rocks. I usually like to say that for me the journey on a climb is much more valuable than the summit, but I have to admit that on this climb the cherry on top of the cake was particularly generous with a beautiful summit spire, breathtaking view onto endless mountains and rock spires, with absolutely no wind! So we stayed up there for a while contemplating, and followed this of course with our usual summit ceremonies. 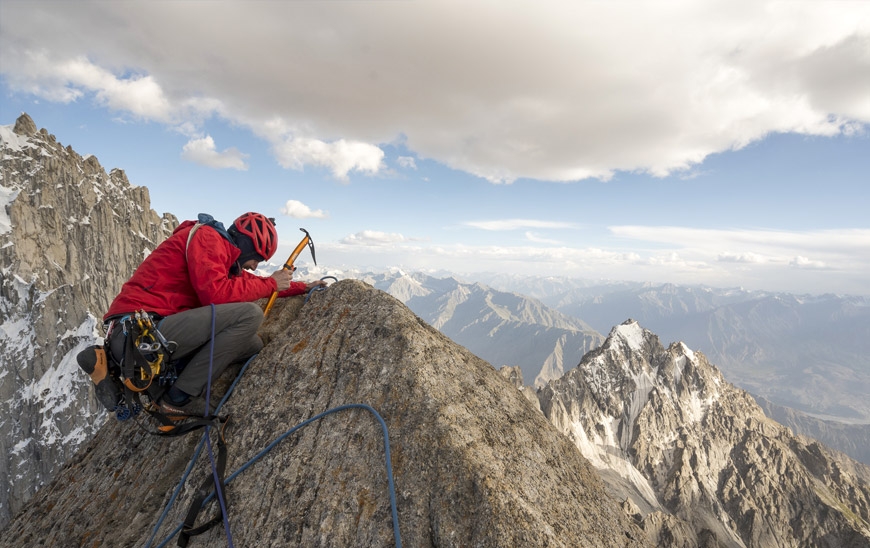 It’s on the way down that things got a little less smooth. Pretty quickly darkness arrived and my headlamp fell down adding extra challenge. The terrain we were rapping on was covered with loose rocks making it impossible to see where rocks were falling. So every time we pulled our ropes, it was a bit like playing Nintendo or maybe more Russian roulette. But somehow it worked and every time we were relief to see we were one step closer to safety. Finally around 10pm we reached our fixed ropes, the straight link to our portaledges. We thought for a second to just rap down on them and come back the next day to clean them in the daylight in order to see better what were doing. But at that point, with the summit in our pocket and a good score at the Nintendo we felt invincible so we kept rapping down. Finally on the last rappel to our portaledges, we decided to build an anchor just 10 meters below the one we used on the way up. The one we used on the way up was placed standing on a ledge. For some reason Carlitos was standing on it waiting for me and Mathieu to finish building the anchor. Just as the anchor was done and we were ready to go down, the whole ledge Carlitos was standing on gave away! We could only hear the sound of something very big coming down and since it was dark we couldn’t see it coming. By reflex we both randomly moved to the side but this time the rock won and impacted Mathieu. 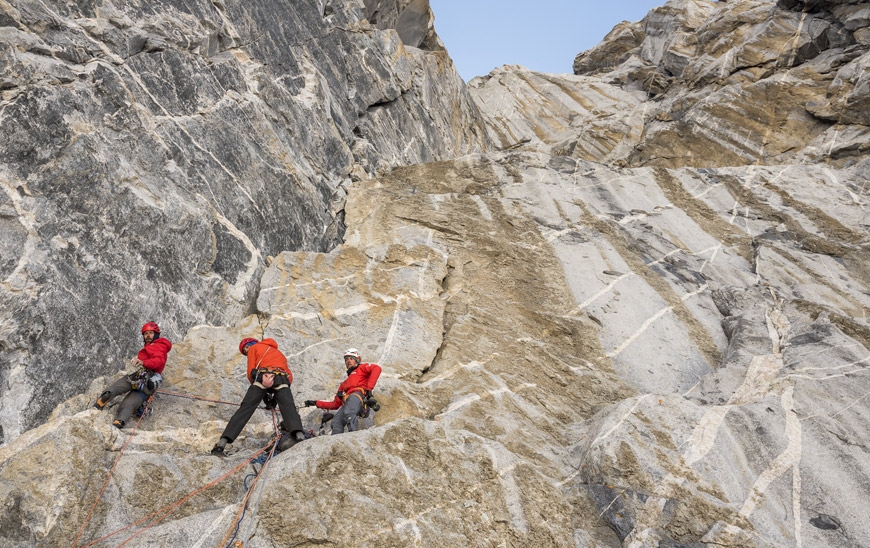 For what felt hours (in reality probably just 3 min) Mathieu stay unconscious. I had absolutely no idea wether he was dead or alive! Thank god he finally came back ton consciousness but in a state shock and with extreme pain on his right arm. We were just 70 meter up from our portaledges so luckily we could just zipped down our ropes to find shelter and call for rescue. Mathieu remained delirious and we were really worried for what could happened but finally after a couple hours he came back to a more normal state. On the first light the next day we brought him down the wall and luckily by mid-day an helicopter from the army came to bring him to the Hospital of Skardu.

Off course this experience brought our motivation slightly down and with Mathieu away it was hard not to feel the void of his absence. We spend the following week working just to retrieve all our equipment left on the wall. Finally just before our time was up in Thagas valley, a nice weather window was forecasted so Carlitos and I decided to attempt a last climb. This time everything rolled and although it had snowed 20cm the day before we could reach the summit of another beautiful virgin feature via a beautiful line. We were extremely happy to finish our expedition with a positive feeling left by a beautiful last vertical journey in Thagas Valley! 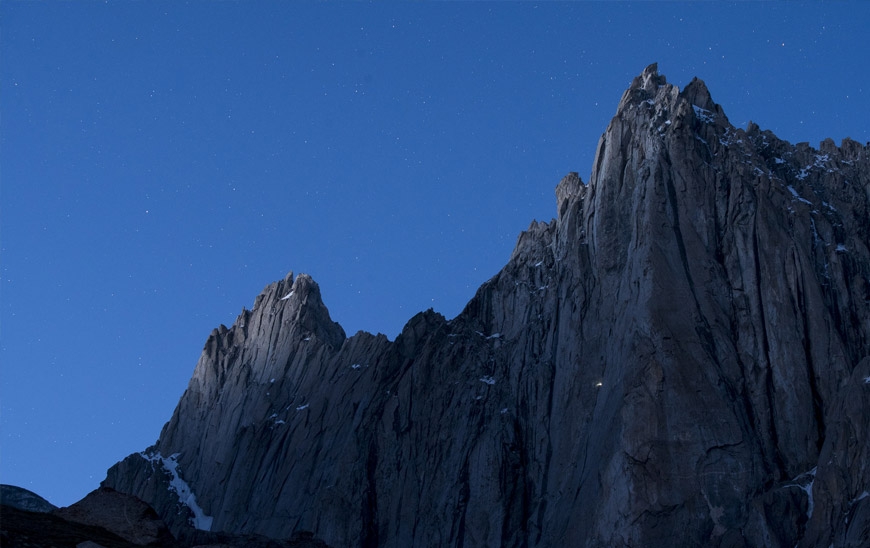 We would like to thank all our sponsors for their crucial support making this adventure possible: Patagonia, Scarpa, The Belgian Alpine Club, Lyofood, The North Face, Julbo, Petzl, Black Diamond, Sterling Ropes, Emargence, Nikon, Aliens and Monnet.

Also we want to thank Ishaq (our local guide) and Mendi (our cook) for their kindness and all the good times we shared at the base camp, the Pakistani rescue for being so quick with the evacuation of Mathieu, Thomas Spadoni, Shamyl Sharafat Ali, Ali Muhammad Saltoro and all the people of Thagas valley who gave us very warm welcome.

Thanks to the extra support of Jean-Louis Wertz for capturing images and the editing skills of Guillaume Lion, a movie of this expedition should be released by the end of the winter.

Nico and the Thagas expedition team! 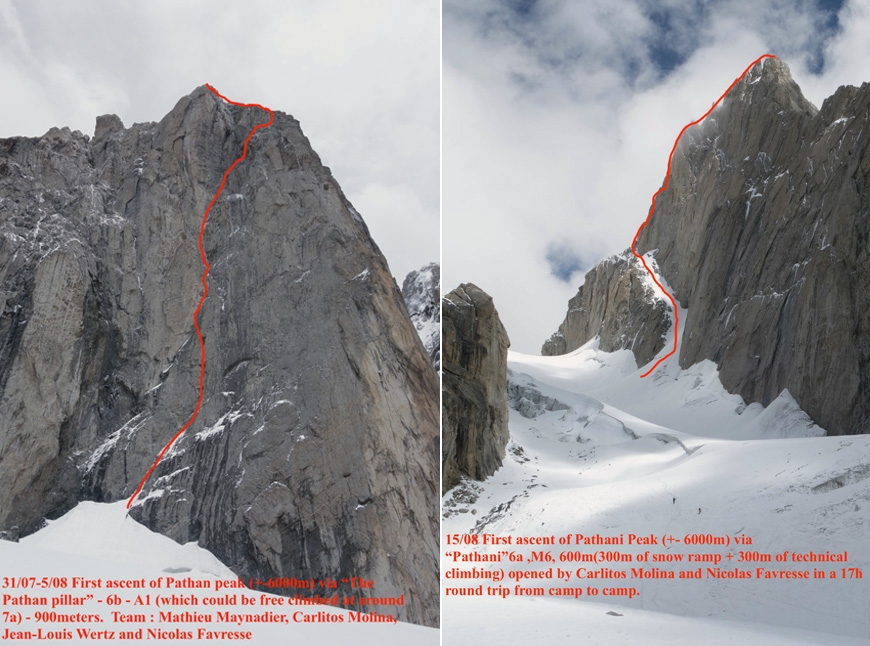 The climbs
31/07-5/08 First ascent of Pathan peak (+-6000m) via “The Pathan pillar” - 6b - A1 (which could be free climbed at around 7a) - 900meters. Over the course of 3 days we fixed the first 300 meters then we spent another 2 days on the wall fixing some extra meters above our portaledges before making our push to the summit. Team : Mathieu Maynadier, Carlitos Molina, Jean-Louis Wertz and Nicolas Favresse