Bine, the ski mountaineer who learned to love the mountains on a snowboard

Slovenian athlete Bine Zalohar joins the SCARPA® team. This is his life story, a tale of freestyling, a passion for surfing and ceaseless travel. “The mountains never deceive, and that’s why I love them”
Bine Zalohar has the deep eyes of a man who has seen sunrises and sunsets in the planet’s most inaccessible places. He’s lived the life of someone whose passion has led him to ski almost vertical walls and who spends his free time talking giant waves on a surfboard. His adventurous spirit was honed in the mountains of his native land, Slovenia. He was born in Kranj, a small town known for the nearby airport and the mountains all around: these are the Kamnik Alps, but there are also the spectacular Julian Alps and the Karawanks. “I write Alps with a capital A”, he always tells his friends. “They’re my habitat and my strength; I love them for their pale limestone, their sharp peaks and their purity.” A guide and a professional ski mountaineer known worldwide for his freestyle skills, Bine is a concentration of energy and joie de vivre. And now he’s joining the SCARPA® team.

Bine, first things first. How did your relationship with the mountains begin?
“To be honest I started skiing late, I’d already finished school. Then I discovered freestyle and it was love at first sight. I competed at high level for 11 years. I really love the sport; I feel comfortable with the balance, the jumps, the flying through the air: I find I can handle my body without difficulty in these situations.”
​​​​​​​
But then came the injury.
“I stopped skiing until 2013, when I decided to turn my life around and devote myself to ski mountaineering, which allows me to travel to remote places and keep my adrenalin levels high, just like when I was on the board.” 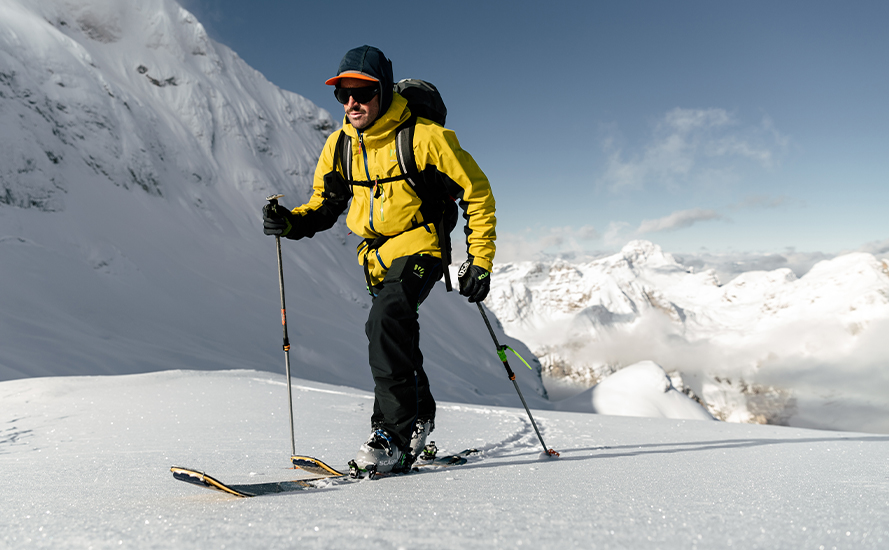 In the course of your career, you’ve had the opportunity to see the mountains of half the world. Where does your heart lie?
“The Hokkaido mountains in Japan are spectacular, and the Daisetsuzan volcanic range is breathtaking. But I can’t forget the time I spent in Chile in 2012, where we were making a film. Although I have to say the whole world is wonderful for me: as long as I can ski and be with people who nourish my love for nature. Plus: how could I forget Chamonix or the Dolomites?”

Thinking about your life in ski mountaineering, which route has been the most exciting?
“I think it was the route we christened ‘the howling wolf’. In 2012 I opened a new route in the western Julian Alps with Matevž Maček e Mathieu Imbert. The shadow of the rock face above us looked like a wolf howling at the moon, so that’s what we called the section a few days later. I still remember the thrill of that moment.”

And which was the most difficult in technical terms?
“Definitely the north peak of Skuta in Slovenia (5.3, D, E3 300m / 1300m). It was the last time I skied with Davo Karničar. He was a master and a skiing legend: the route was exposed, the conditions weren’t the best and the pace was extremely fast. But we made it.”

How do you cope with such dangerous adventures?
“I’ve had to do a lot of work on my mind and psychological resilience: injuries, loneliness and pain are never far away. But if you can develop mental strength, you can handle any situation.”

And through it all, you’ve never stopped loving the mountains?
“How could I? It’s the only place I can really express my deepest emotions. In the mountains everything is honest and true; there’s no deception, just nature, which makes you bow down in front of it. You have to know it and respect it, and it repays you with the most sublime beauty a human can ever see.”
​​​​​​​
Share
You may also like