Nina and “Hulkosaure”, 8b, Verdon

"Looking for those instances when everything around you disappears and you only focus on the next move…"
Nina Caprez tells of her climb of Hulkosaure, a breathtaking route in Verdon.

“Those lines...
Sometimes I catch myself watching a line with this weird feeling of excitement and fear. Hulkosaure has been one of those. It's a 40m crazy single tufa on a steep and blank wall.
You can look at it again and again, and every time you could find an excuse not to go because deep inside you know that it requires full commitment. When I caught up with my climbing partner Ann Raber in the Verdon gorge a few weeks ago, I had this "Hulkosaure" line in mind. But I wasn't sure if I would have the courage or the right mindset to try it.
I met Ann straight at the cliff that day. She has been sitting there, peaceful and calm. We ate some tarte I brought from Grenoble and chatted about life for an hour. In those moments, you don't think at all about climbing, projects, expectations. You simply live the present moment with your friend and that's when I feel really at ease.
After that, this big joy and excitement overcame me and I racked up with 25 quickdraws and started climbing the huge line. 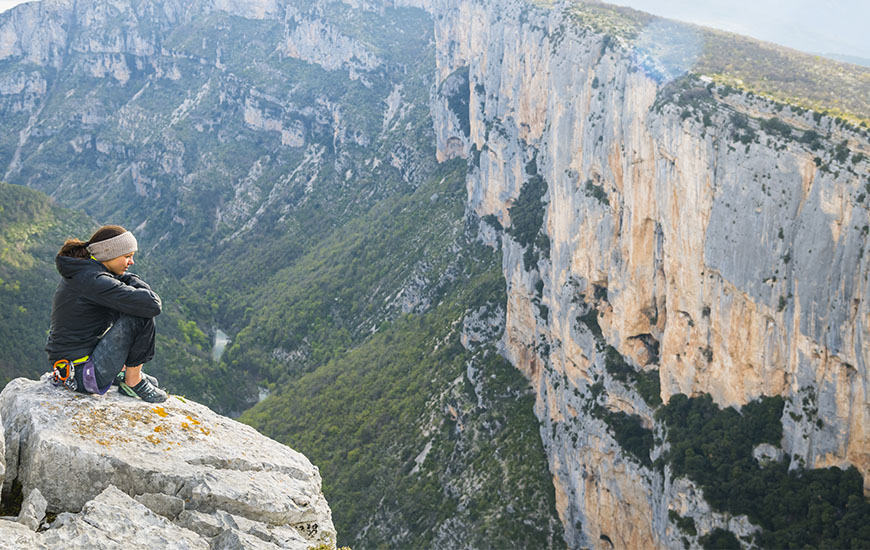 ​​​​​​​Putting up the quickdraws was a real pain in the butt. Pain because I desperately tried to kneebar that tufa, but it did not work. My legs started hurting a lot, due to the missing kneepads, and I had to stop at every single draw.
On my way down I wasn't sure if I would have enough "full-body" energy and courage to give it another go on the day. Ann was close to sending her project, but then ended up cleaning the route in order to do a multipitch the next day. That somehow put a little pressure on me, because I wanted to send before moving on to some cool vertical water drop hole climbing "à la Verdon".
And so I climbed as if it were the last chance ever for me to climb that line. I somehow improved my technique by doing, and instead of kneebaring, I climbed the tufa in the same way you would picture climbing a coconut tree!
When I made it up to the chain, I almost had to vomit because of the massive fight I’d had to put in. Hulkosaure is worth it though! If you don’t believe me, you need to go see the line for yourself! The next day, we climbed an amazing 7a multipitch in the gorges and my mind focused again on the classic Verdon climbing style. But the pain in my beat up legs did not disappear for over 10 days.
Feeling some pain is good from time to time. It reminds me that climbing counts and is a check on how hard I really try. Without those fights, I might lose interest in climbing in fact. The grade of Hulkosaure is 8b, which is in the end totally irrelevant. To me, whatever the grade is, I give my very best. Those instances when everything around you disappears and you only focus on the next move, is what I'm looking for.
And then, when the fight is over, when we are back on the ground, our surroundings become real again and we can face life in all its complications. We can eat a piece of tarte and pick up the life talks where we left them.”