Our arrival time with the sun dipping across the horizon and did not go unnoticed. As we drove through the village, we turned around to see a hoard of children swarming behind our vehicle. The adults quickly arrived and bid us welcome. The next day they explained to us that Dansam peak was also named the “dangerous mountain” and we would soon understand why. After visiting the Hot springs and spending a couple of days meeting the locals, we made our way up to our base camp: at 4000m a grassy valley bed strewn with beautiful boulders, at the foot of the glacier that gives access to the cirque of the Dansam North face. The face was not visible from base camp and we were very excited to get a first glimpse of what awaited us. The next day 4 hours of hiking on moraines had us pass the bend of the glacier and we immediately understood why it is nicknamed “dangerous mountain” by the local shepherds.

The three immense pillars of stone that we had identified in the photo were capped and decorated with very active and impressive seracs. The eastern summit appeared to us like a giant’s armchair. The arms rests, respectively the immense eastern and central pillars, stood out boldly. In the middle, the icy seat was made of deep blue and fractured ice falls. The west pillar, standing on its own, felt to us as the most elegant feature. The ridgeline shot out across the sky, its steepness softening only towards the summit. It also had the appeal of being the safest feature, not threatened by any serac.

Being below this face where no climber had sunk his axe or grabbed was a real treat! We could choose the most logical and appealing line. It felt like being a kid in a candy shop, with unlimited credit.

During the next two weeks, we enjoyed perfect blue skies. We stopped looking at the weather forecast and started to believe the weather would stay that way during the whole month. We spent those days acclimatising and carrying gear from base camp to the foot of the wall. When we felt ready and anticipating that the ice conditions would deteriorate quickly with the rising temperatures, we made plans to climb. Then it started snowing. 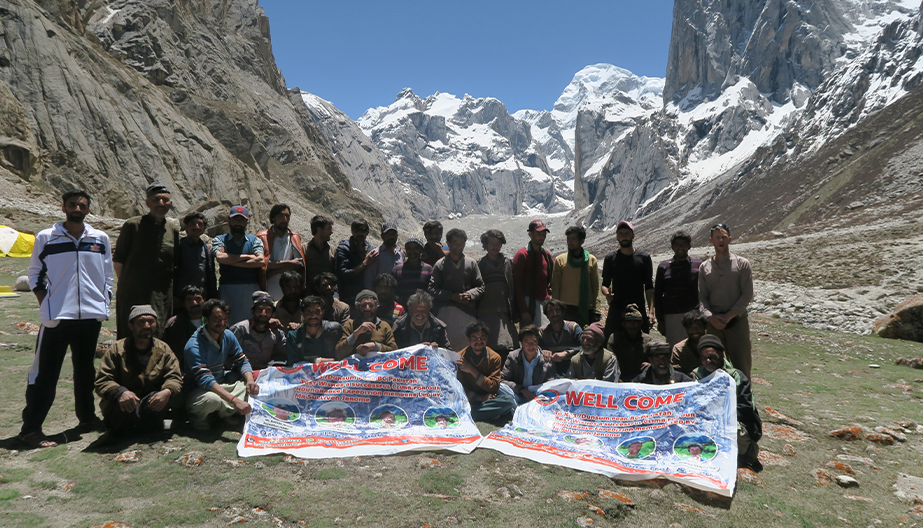 For the next 10 days, the weather was awful. The temperatures plummeted and every day we woke up under a fresh blanket of snow in base camp. The end of the trip was approaching, and we all had guide work waiting upon return so could not change our flights. Martin believed the new moon would bring a change in the weather. We waited patiently until the last moment. The waiting was frustrating as the deadline came nearer and we faced the possibility of going home without even an attempt. Eventually, the moment came! With the new moon, it was time to harvest the seeds we had sown.

On the 24th of June, we set off for advanced base camp although the weather was not so nice. 7 hours later we were at the foot of the wall. The next morning, we set off for our 6-day ascent. After having climbed 400m of zigzagging snow ramps of terrible and unconsolidated snow we set up the camp on snow rid dubbed “les pentes a Damel”, Djamel being Jeremy’s nickname. Here we would wait out the snowstorm that followed for the next 24 hours. The chosen line being a natural gully, it channelled the falling snow. Although our tent was not directly exposed, the gusts of air caused by the frequent avalanches would blast the tent and cause us to worry about our safety and the success of our ascent. The next day we left under a light snowfall and heavy spindrifts. We were now in the central gully system and the ice quality was great. Between shouts of “spindrift!” and ‘hoods on!” we made good progress. Some pitches were quite steep and physical and others more moderate and hard on the calves. This ice gully led us to another snow rib we called “le linceul”. We reached this quite late at night and dug out a poor bivy site. The night was short. 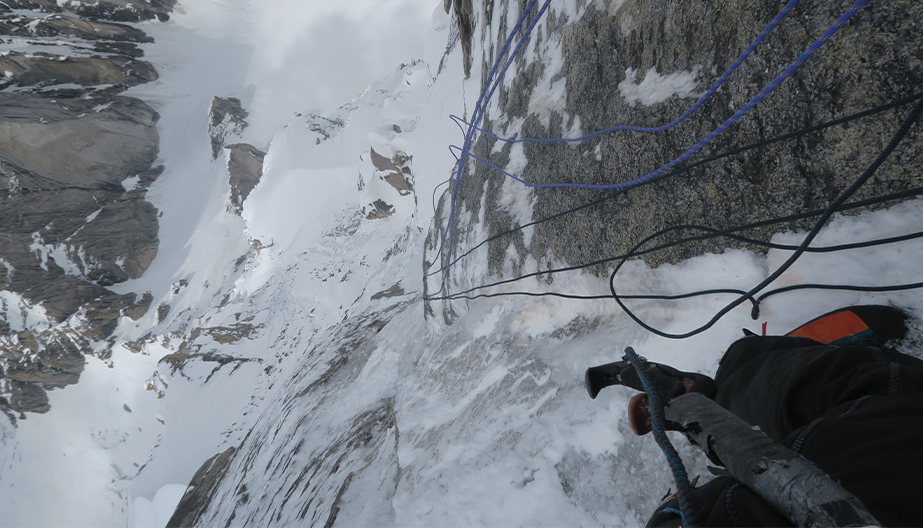 The next day was the crux as we needed to breach the 400m of steep rock leading to the summit slopes. Mixed pitches of great quality up to M6, with some portions of vertical and even overhanging ice, let themselves be discovered. Victor led the hardest pitch: an overhanging ice smear on which, against all odds, he was fortunate. The ice had formed in the most improbable places because of the bad weather the past weeks! As we would discover descending the route in rising temperatures, good conditions were quite ephemeral. Without all the ice the headwall would have been quite complicated as the rock was of poor quality. This was a great climbing day as we marvelled on the quality of the climbing at 6000m. Looking behind us, the Karakorum appeared in the distance: K2, G1, G2, G4, Broad Peak…

We reached a decent bivy spot on an exposed and corniced ridge before nightfall and went to sleep with high hopes of reaching the summit the next day. But the next day would be full of surprises!

On the 29th we woke up to a starry night. Fatigue was showing and it was difficult to get started. We left our tents and rock gear and departed for the summit at sunrise. We were surprised by the difficulties. We had imagined that the more moderate terrain would be breached quickly, but the bullet-hard ice hidden beneath 10 cm of powder snow proved extremely time and energy consuming. On 60° slopes we had to build anchors and it took us a good part of the day to climb the 400m separating us from the summit.

Here came our second surprise. As the rock nipple that is the west summit appeared (invisible until the last moment) Martin, who was leading, started to laugh. I thought “oh there must be another obstacle barring our path”, but as I approached, I saw the reason why. A fixed piece of rope was dangling from an old piton! We all started to laugh at the absurdness of the situation. Although we really did not care so much that the summit had already been climbed, it felt ridiculous to have put in such effort and discover a piton on the last 20 meters! It later offered an interesting reflection on the personal and collective worth of climb, the first ascent of a route or a summit. The route we had just climbed was void of any trace of previous ascent. The north face of Dansam (leading to east or west summit) had never been climbed.

Our ascent had been shrouded with doubts and unknowns, specific to pioneering a route and mountain, and that is what was important to us. At this point the details of the Japanese ascent remain unknown to us, but we suppose they ascended the snow slopes of the south face, from the still forbidden Goma flank, as the fixed ropes on the summit pointed towards a heavy style of ascent and we found no trace of passage on our pillar (which seems to be the only feasible way up to the west summit on the north face). Our joy on the summit was untarnished by the discovery of the old rope and we hugged and laughed and even shed a tear!


​​​​​​​
We descended from the summit in a day and a half, rappelling our route, and walked into base camp on the 29th at night. We felt really privileged to have climbed an aesthetic line in such a pristine location. We named the route “Harvest moon”, as the new moon phase brought us the weather we needed. The next day we packed up base camp early and set off on our next adventure: catching the plane in Islamabad in the little time we had left!

The Kondus Valley holds mountaineering treasures for future parties and the villages of Khor Kondus and Karmanding are truly amazing places. The locals are humble people who live in very harsh conditions but are extremely welcoming. The surrounding rock spires offer endless possibilities although the rock quality is not always very good. And the hot springs are a great place to relax! Huge thanks to the Balti people for such a warm welcome.

Photo and text by Jérôme Sullivan