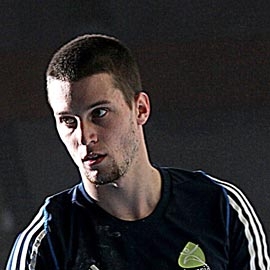 In a mere two days Slovenian rock climber Jernej Kruder redpointed a 9a sport climb and an 8C boulder problem, namely 'Bi herri, borokka bat' and 'Catalan witness the fitness' at Cova del ocell in Spain.
Jernej Kruder, the Slovenian who made headline news in October 2016 for having carried out the first repeat of Es Pontas, the famous Deep Water Solo freed in 2006 by Chris Sharma on the Spanish island of Mallorca.

26-year-old Kruder has now underlined his astounding climbing ability by sending - in the space of a mere two days - a 9a sport climb followed by an 8C boulder problem. The route Kruder crushed is Bi herri, borokka bat 9a at Cova del ocell in Spain, where a few hours earlier he had fallen off the last moves of Catalan witness the fitness, the problem freed by Chris Sharma in early 2016. Roused by his redpoint, the next day Kruder returned with a crashapd and, as he himself recounts, he "somehow found just enough of aggression to pull out every piece of energy I had left, to finish this 22 moves boulder line. It was unbelievable! Making 9a route and 8c boulder in 2 days is just something wonderful."

Besides his 9a, his 8C boulder problem and the physical and psychological demands of the hardest DWS climb in the world, it’s worth remembering that in the past Kruder has also explored the multi-pitch realm. In 2015, for example, together with Gregor Vezonik he pulled off the first repeat of the 8b+ Hattori Hanzō on the North Face of Titlis at Engelberg in Switzerland. It’s also worth noting that Kruder has an outstanding background as a competition athlete; his best results include silver in the 2014 Bouldering world Championship and victory in the 2014 Rock Master Boulder comp. Kruder, just like Zangerl therefore, is a cutting-edge all-rounder…. could this be the direction that climbing of today and tomorrow is heading?