Hervé Barmasse, Shisha Pangma and the lure of unpredictable mountaineering

Interview with Hervé Barmasse, together with Germany’s David Göttler will attempt a new route up the South Face of Shisha Pangma (8027m) in Tibet. Should things go according to plan this would be Barmasse’s first 8000er.

Hervé, you're currently in Tibet with David Göttler. Your goal is to climb Shisha Pangma. Tell us what you want to do and how you want to go about it?
The aim is to climb the South Face of Shishapangma (8027 meters) via a new route without supplementary oxygen - which I personally consider doping - without fixed ropes or previously established camps. My dream is to climb my first eight thousander without ascending a normal route. Doing it by establishing a new line would be amazing.

How did this idea come about and what are the biggest difficulties (and, if you want, the biggest dangers) that lie in store?

I first thought about this project last May when I was in Kathmandu. David had just returned from his first attempt up this face with Ueli Steck, while I had just attempted Nuptse with Daniele Bernasconi. We both knew we might team up because in the winter season we’d started training together. In June we booked the plane and started all the bureaucratic paperwork to get the permit.

Why did you team up with David in particular, and to those who don’t know him, can you introduce him briefly? Out of interest, how do you choose your climbing partners?

David is extremely motivated and focused on his goals, he trains systematically and is great at dealing with all the organisation and logistics of a project, as well as deciding well in advance when an expedition should begin. This, coupled with the fact that we get along really well, are the things I look out for in my climbing partners and which make two individuals combine as a team, sharing 50% of the tasks, knowing that both work equally hard towards a common goal. And, truth be told, there aren’t that many alpinists who could attempt a route like this in this style. He is one of the few. 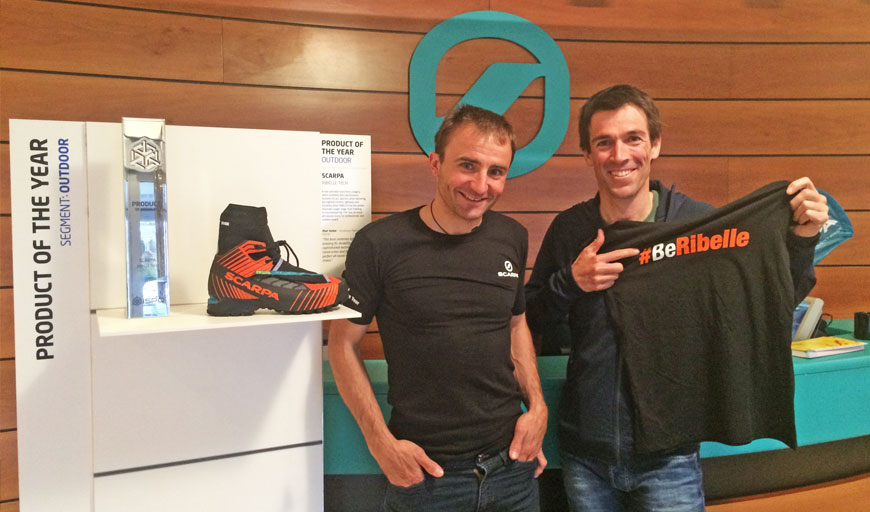 Talking about this route... what are your chances of success?
Objectively speaking the percentage is very low, about 10%, but I’m very confident and I’m positive. Unfortunately though, like all projects in the mountains, there are some factors that cannot be controlled by our motivation, physical preparation and willpower. What influences an expedition most though are the conditions on the mountain, the weather and the objective dangers. But if you get there and you’re well prepared, then the chances of success are higher and, should you fail, you’ve got fewer regrets. This is why I started training and thinking about high altitude mountaineering in a different way, in order to leave nothing to chance.

During the last two years you haven’t been particularly lucky from a physical point of view. In 2015 you had cervical spine surgery, last year you had knee surgery. Let’s just say you’re “used" to injuries, starting with the one that ended your promising ski racing career. In short, you’ve been “reborn” physically several times. What have the long periods of rehabilitation taught you?

To focus above all on the important things of life, to choose who to live with and with whom I wish to share it; to reflect on my mistakes, ask myself questions about the greater things in life, prioritise those values which are worth fighting for, and to constantly question my future. And in my future I’e identified many different projects, including the mountains. Furthermore, during rehab I got to know my body a lot better and recognise its limits thanks to my trainer, physiotherapist and nutritionist. This enabled me to significantly reduce recovery after my operations, and to train specifically for my mountaineering projects. The results have been amazing. We’ve created a specific training plan for mountaineering that can be applied to anybody who isn't’ worried about putting in some hard work.

Talking about your body and training... last February you travelled to Nepal for some intense altitude training not only with David Göttler but also with Ueli Steck and Sherpa Tenjii. How did this come about and can you give us an example of your training?

In all outdoor activities training is necessary in order to improve and be in the best physical condition to achieve the goal of the season or year. Despite not having a base for comparison, we nevertheless thought that this could be useful for all future projects in the Himalaya, and so we decided to spend some time training at high altitude, which for an alpinist means being above 4500m and training with the same volume and intensity as a ten-day period in the Alps. This should allow us now to acclimatize faster and climb better at altitude. Our "reference" training was climbing 6200m high Island Peak from the village Chukung. Technically speaking the ascent is easy and someone who has trained normally requires two to three days, while we did it less than seven hours. For me this entire process was really interesting, not only as an experiment in its own right, but also to check how my training was going. Unlike Ueli and David, due to my accidents I hadn't been able to train regularly and was at a disadvantage. Since May 2015 I’d done absolutely nothing for 8 months, had spent 6 months recuperating from the complicated cervical surgery and knee operation, and had only trained specifically for 3 months. Absolutely nothing compared to their "years" of continuous training. I can assure you that before departing for Nepal I was really worried! And yet, despite everything, I kept up. 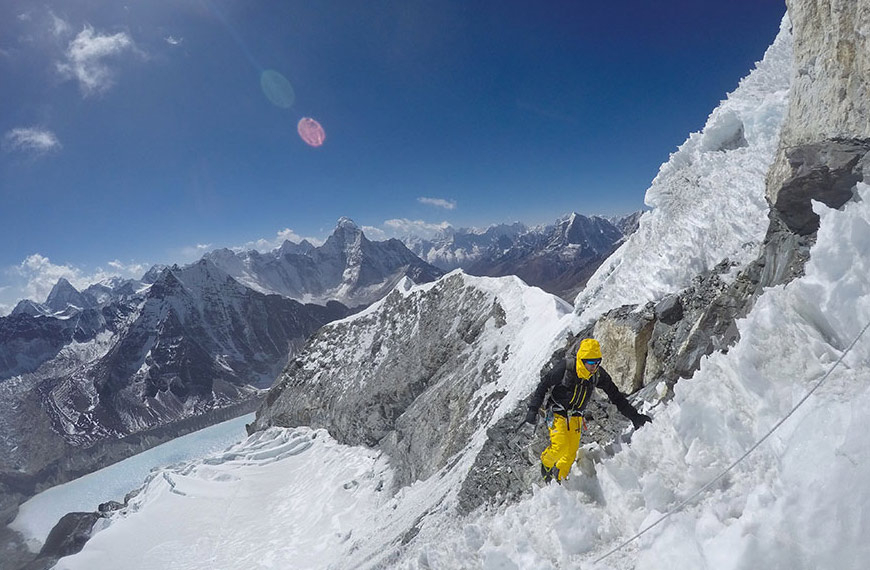 While you were in Nepal, you wrote on facebook: "Thanks to my training partners we’ve managed to compare workouts and we’d come to conclusions that could be summed up in entire articles and books even.” Can you share some of this?

Well the first is that training is an integral part of alpinism, it’s useful and leads to results that will affect ascents in the future and, above all, overall safety in the mountains. Being better trained implies being more capable at dealing with difficulties and unforeseen circumstances in the mountains. What mustn’t be forgotten though is that training is of no use whatsoever if it’s not based on mountain knowledge and culture; these fundamental aspects are far more important than specific physical training for mountaineering.

You are undoubtedly an athlete or at least, as well define yourself in your book "La montagna dentro, the mountains inside", you are a sportsman, you have the background of an athlete and you train just like one. At the same time though, you are the result of the teachings and tradition you strongly believe in: the Matterhorn Mountain Guides, your father, your grandfather, as well as entire school of "classic"mountaineering, led by the likes of Walter Bonatti and Reinhold Messner. Are these two different aspects that contrast each other?
No. Mountaineers have always trained hard in order to climb up in the mountains. From nights spent out in the cold in order to prepare for the rigid winter temperatures, to pull-ups executed on hayfork handles tied to tats of hemp in barns, to training trips out in the mountains prior to the most important ascents. Training has been a part of the background of mountaineering, even before the first ascent of Mont Blanc. There is ample evidence in books by Edward Whymper, Hermann Buhl, Walter Bonatti and Reinhold. Messner to name but a few of how alpinists have always meticulously trained for their climbs. The way we train is changing, but training in itself has always existed. Improving our qualities doesn’t mean turning our backs on presuppositions of mountaineering - i.e. the search for something new and man’s confrontation with his limits and nature - rather, it implies having greater chances at looking towards new horizons. The mountain guides? The above mentioned example of training in a barn was specific reference to one of the most capable and authentic mountain guides in the history of mountain guiding. Luigi Carrel, a.k.a. il Carellino.

In short... is there a competitive aspect to mountaineering?
Fortunately, yes. Unfortunately, yes. Fortunately yes, because if you examine the results of those who are better than you, then you learn and improve faster. Unfortunately, yes, because nowadays envy is far greater than the desire to recognize the achievements of others. A blind envy that often leads to goals being achieved by any means and cost, simply to prove that you’re better than others, hiding behind the excuse that there is no such thing as rules in mountaineering. But it’s not true that there are no rules to adhere to. the rules in mountaineering have always reflected the rules of man, such as values and ethics. First and foremost the respect for nature and others. 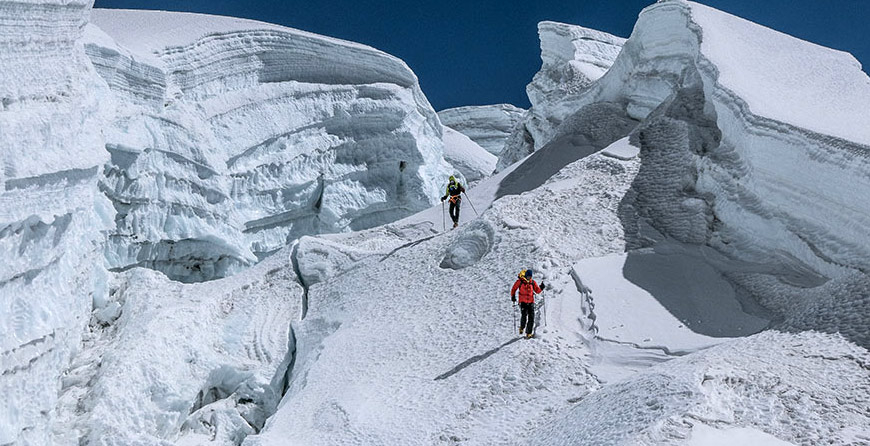 So what is it about mountaineering that you love most?
I’ve been lucky enough to experience different things on different terrain: rock, ice and mixed, together with a climbing partner, on my own. Nowadays I could go as far as to say that the mountaineering I prefer most it the one where Mother Nature decides whether to let you continue or return home. It’s a form of alpinism that confounds even the most experienced mountaineers, where a simple ascent along a ridge can be more dangerous and consequently adventurous than a cutting edge ascent technically speaking, where there is greater safety. A form of mountaineering where the outcome is unpredictable.

This year you were a regular guest on Italian national television, in the program ”On the slopes of ”. What was this experience like and, above all, what do try to transmit about mountaineering in general and your climbing in particular?
I felt at ease on TV and the experience was very positive. The message I’d like to get across is for people to venture out and experience the mountains which for many, perhaps too many, are associated with danger only.

Let’s get back quickly to your experience in Nepal: the other two of this quartet, Ueli Steck and Tenjii Sherpa, recently departed for another great project: the Everest - Lhotse traverse. What are you thoughts about this? And, given that everyone knows about Steck, what can you tell us about his climbing partner on this adventure?
Regardless of how much we train they, the people of the highest mountains in the world, have inherited an ability to adapt to the high altitudes that we can barely match. At best we can try and get close to it. In February Tenjii proved this on various occasions. We only emerged on technical terrain on exposed sections. But when Tenjii, like the other Sherpa, becomes a technically proficient mountaineer, he will certainly stand far better chances than us at expressing himself up at high altitude. Having said that, he’s already poised for the traverse and super motivated. It would be fantastic were they to succeed.

On Shisha Pangma you’ll attempt your first 8000er. What do you expect and hope for?
I hope for the same thing as I always do: to have fun! 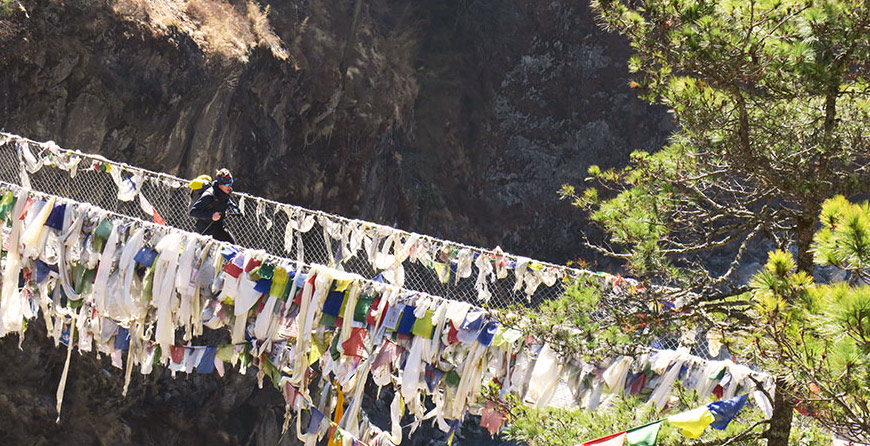