A staggering 10 athletes had qualified for the finals, with Laura Rogora, Mei Kotake, Hannah Schubert and Akiyo Noguchi joint-equal on the 44th hold of the semis, and Anak Verhoeven, Jessica Pilz, Jain Kim and Janja Garnbret tied on the top hold. These two blocks of four were separated by Ashima Shiraishi and Mia Krampl and this implied that, should athletes be tied in the 45-move finals, then time would become a deciding factor.

Young Laura Rogora had already produced an outstanding performance to qualify for the finals in her first senior World Championships and as she climbed she waved madly to the crowd and simply enjoyed the moment like never before. After this beautiful start Mei Kotake climbed impeccably, so perfectly in fact that Schubert, Noguchi, Shiraishi and Krampl all failed to reach her highpoint. Even Verhoeven fell lower down, after her foot slipped just as she was powering upwards with ease. Jain Kim was obviously keen on doubling her World Championship takings after having won in 2014 and she climbed with the usual ease and efficiency that have also netted her 25 World Cup victories; she finally climbed past Kotake’s 33rd hold only to fall off immediately afterwards.

With two climbers left to come, the South Korean was guaranteed a medal. All that remained to see was what colour it would be. The crowd cheered as home-athlete Jessica Pilz entered the arena. Having won her first Lead World Cup stage just a few weeks ago, the 21-year-old was evidently on great form; not to be distracted by the spectators Pilz climbed regally, above all on the finishing slab and the double dyno for the top. Astounding.

At this point in order to win, Garnbret was forced not only to reach the top, but also to do so faster than Pilz. No mean feat. Judging by the crowd’s reaction, the Slovenian most certainly knew that Pilz had topped out. Unperturbed, Garnbret held her nerve and powered to the last hold. Her fourth top this competiton. There was no way she could have done better. But how quickly had she reached this final top? Everyone looked towards the judges. For a moment there was absolute confusion. Then the crowd erupted. Pilz was first by just a few seconds. Incredibile. 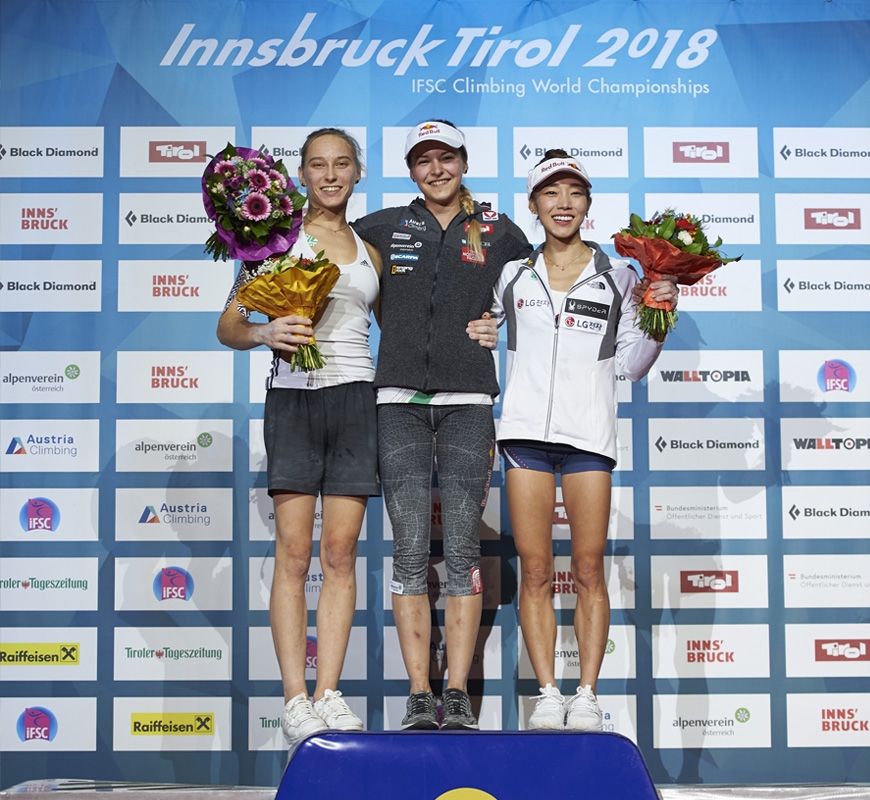