Welcome Hillary Gerardi, the smiliest skyracer in the world!

American by birth, French by adoption. Hillary Gerardi tells us the secrets that have made her one of the best alpine runners in the world.

Hillary Gerardi was born in 1986 in a small town in Vermont, United States. But seeing as the existential motto she has carved into her soul is “love what you do, do what you love”, in 2010 she decided to move to the French Alps with her husband Brad. Now, they both work at Crea Mont-Blanc, the research centre for Alpine ecosystems: he is becoming a mountain guide and she is training to hold onto her leading position in skyrunning. She had a record 2018, becoming world champion of the “Skyrunner Extra World Series” circuit.

Hillary, and to think that everything started with a ham that they gave you after a race. What happened that time?
(Laughs). “I actually came to that mountain race more or less by accident. Since I was a young girl I loved outdoor life, then as time went by I become passionate about ski mountaineering and climbing. I only started running in 2012, due to a bad skiing accident. I was looking for something less dangerous and I found love. Which burst out in the Chartreuse mountains near Grenoble, France, when I won a 25-kilometre race, and the prize was an entire ham. I was so unbelievably happy that I swore I would never stop”.

Since then you’ve seen plenty of mountains and run dozens of races. What is your favourite surface to run on?
“If I don’t use my hands, I’m not happy. I love the more technical, difficult paths - even better if there are ropes involved. That’s why I fell in love with races like the Kima Trophy and the Monterosa Skymarathon. I like running through the woods, I’m happy if there’s a single track uphill through the rocks. But the rock climber in me wants vertical, aggressive paths. To those who ask me what my ideal race is, I always give the same reply: a race from the base of a mountain to the summit, and back again. That’s where it all started”.

Passion, of course, but there must be a great deal of training behind your results. How do you fit it in with your work?
“I try to plan my week and fit in three or four outings, each about an hour, an hour and a half. Then, during the weekend, I go much further, I try to go out for at least three or four hours. The trails I run are the ones near home, on Mont Blanc. But when I can, I try to travel, to discover new places. I have the soul of an explorer in me - racing is just a means to an end. I like going far, running for a long time, looking for new places on the map and seeking them out. Nowhere is far away if you truly want to reach it”. 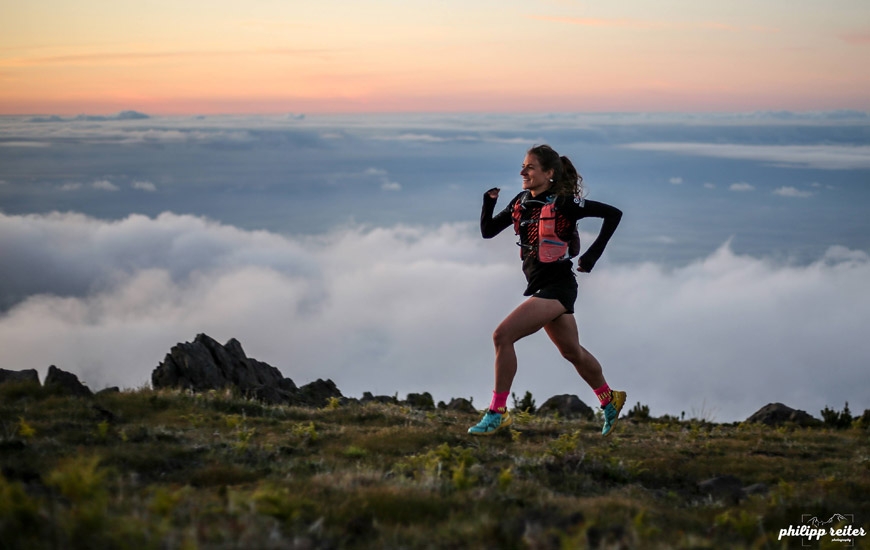 This has taken you to incredible heights - you’ve run and even won the race organised by Kilian Jornet, the Tromso Skyrace in Norway. But which challenge do you have the most emotional memories of?
“At the moment, I’m trying out every dimension I can, from the vertical kilometre to the ultra, by way of skyraces and trails. There are lush, tropical races like those in Madeira, and other, more austere ones, like the one in Canazei. In any case, Kima, Tromso and Glencoe are some of my favourite trails: they’re super technical and I love some stretches of them. Although at the end of the day, the most unforgettable experience was diving into the lake after the Limone or the Trentapassi”.

And at each of these races, there’s a photo of you smiling, and the joy that you exude on the most difficult trails has made you famous. How do you always manage to be so happy under stress?
“I didn’t know about racing before I got into skyrunning. I loved the mountains, the breathtaking landscapes, and the thrill I got from that silence. That’s why, when I’m tearing downhill or climbing up the toughest inclines with my hands, I’m just happy. I’m where I want to be, doing what I love doing: I feel lucky and at peace with the universe. If I ever realise that I don’t feel that joy during a race, I don’t think I’ll want to race anymore. I have no other secrets”.