In November, before going to Spain, I had my mind on two fantastic projects, one in Cresciano and the other in Brione. Both are masterpieces, extremely hard lines on perfect gneiss; both share the start with two amazing problems, Dreamtime (the first 8C in the world) and Pamplemousse (classic 7C+).

The Dreamtime project starts with a powerful sequence on slopey holds which leads to a left shoulder and a right hand micro crimp. From here, you only see blank rock, except for a shoulder hold, which seems impossibly far away.

The Brione project is a big overhang with seven perfect holds. This problem requires both finger and shoulder power.

I came back to Ticino on January 1st, motivated to try hard. After a week of acclimatization and a few more sessions I finally unlocked the sequences. To execute the single movements it’s like solving a puzzle: you know that it’s possible, but it can take a lot of time. The obsession set in and I started focusing on every single detail, pondering day after day the best moment to try.

At the start I was optimistic, but things didn’t pan out as I’d hoped. After a month trying only these two projects, stress and insecurity became more and more concrete. Skin problems and lack of confidence continued to shut me down throughout January.

With the arrival of higher temperatures, the window to complete the boulders became very small. Meanwhile, Jimmy Webb had joined me, and we decided to specifically focus on the Brione project. We started getting close, both of us falling off the last move. Then, on February 12, on the last try of the day, everything lined up perfectly, and I found myself on top of the boulder, overjoyed to have made the first ascent of Poison the Well. Jimmy kept trying, but due to the rise in temperature he still hasn’t done it. 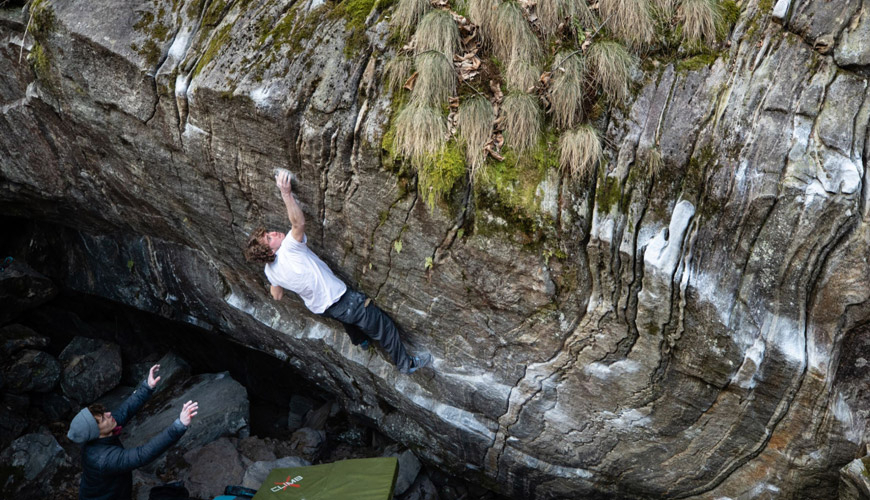 Feeling liberated, I went back to Cresciano to try to complete the mythical Dreamtime project. The crux revolves around two very small holds, so heat becomes your worst enemy. I immediately realized that the only chance of getting colder temperatures was during the night. My next session, on February 21st, I arrived at the boulder at 11PM; after about two hours of waiting, everything felt aligned so I decided to try. When I started climbing I felt light and precise, and before I knew what had happened I was standing on top of REM. During the send I felt connected with the rock, but when I topped out it took me a moment to realize that I had actually done it; everything was blurry, like in a dream.

Poison the Well and REM are certainly two of the most memorable and special lines I’ve ever done.