Like many climbers, the 29-year-old Slovenian got his start in the vertical world by scaling trees as a child. Except for the few brave ones amongst us, this is where our childhood similarities end, though, and his innate enthusiasm and love of climbing take over. As Jernej describes these childhood memories, he lights up with laughter and recalls, "changing trees from one treetop to the next," and shimming up flagpoles and fences; if it was vertical, he climbed it. At age seven, the logical step was to turn to indoor climbing at the local club in his hometown of Celje. 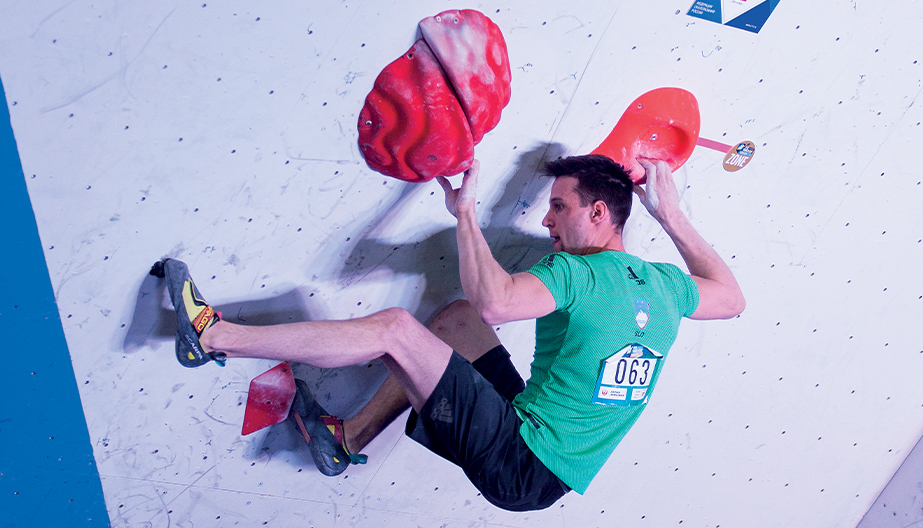 ​​​​​​​As is common in Slovenia, he was introduced to competition climbing almost immediately and found he was a skilled competitor and enjoyed the challenge. That same year, his coaches introduced him to outdoor climbing, igniting his determination to climb outside as often as possible. He explains, "by the time I was 14, I was old enough to go climb outside on my own, and I started asking my parents to drive my friends and me to new areas, I didn't even care about the weather [if it was cold] I just wanted to go climbing outdoors."

This enthusiasm for climbing helped him lay the foundation as a strong multi-disciplined athlete. After joining the Slovenian Youth International team, he claimed multiple titles such as the 2005 Youth Vice-Champion in Speed. He also began ticking off challenging climbs around Slovenia, such as Botulin (8c+), in Kotečnik. In his early twenties, Jernej continued to place well in competitions; just a few examples from his long list of distinctions include a 4th place finish at his first-ever finals in the 2010 Vail World Cup and a 1st place title at the 2014 Rock Masters in Arco. He was also collecting routes outside too; in 2013, he ticked off the boulder problem The Story of Two Worlds (8c), in Cresciano, Switzerland, and in 2015 made the first ascent of the 60+ move sequence Massacrate (9a+), which at the time was the hardest climb in Slovenia.

From the outside, it might appear that rigorous competition training with coaches crossed over to help his outdoor climbing, but by his mid-twenties, Jernej felt like he was falling short of his true potential on both rock and plastic. Furthermore, his coaches' strict training agendas never aligned with his climbing vision, making it difficult to find personal success and have fun. He explains, "I didn't want to spend too much time outdoors because I was worried about missing training and then performing poorly at the World Cup, but then I couldn't spend the time I needed to finish my projects. At the end of the season, I wasn't competing as well as I wanted; all of this left me feeling like I hadn't managed any climbing results throughout the whole year."

In the spring of 2018, frustrated by this cycle and looking for a solution before giving up on World Cup climbing, he decided to change his training approach and enjoy some multi-pitch routes. "I hoped if I focused on hard projects, this could replace my training sessions," he explains. That spring, he climbed two (8b+) multi-pitches in Osp, Slovenia, and as he met with the National team before the season started, he was pleased to see his indoor-strength hadn't dropped at all. His success didn't stop with muscle-strength, though. As the World Cup season ticked on, Kruder found himself calm and collected during competitions. He could look beyond single mistakes, and individual stages no longer held the pressure of defining his hard work. Being able to enjoy the crowd's positive energy, the fun of competition, and each event allowed him to accelerate throughout the season, ultimately earning the 2018 Overall World Cup title.

Through this theory, Jernej has created a new training system that follows his passion as an all-around climber and allows him to incorporate a training style that builds on strength, endurance, and power without getting drained from hyper-focusing. Now, like the changing seasons, he shifts disciplines throughout the year. In winter, when it's cold, he climbs hard boulders. Come spring and autumn, he looks forward to sport climbing. When the heat sets in during summer, he explores endurance-building multi-pitch routes. At the same time, he shows up to competitions fit, excited, and ready to perform with a clear mind. This method helped him take 1st place at the 2019 Moscow World Cup and finish the season in the top 10 rankings. The same year he also climbed the famous test-piece Dreamtime (8c), in Cresciano, Switzerland, and Bumaye (8c+), in Margalef, Spain.
​
As Kruder talks about his achievements and the reward of climbing, he shares a passion he believes every climber can benefit from, "climbing is fun because we get rewarded every time we go climb. When you do a route for the first time, it is a reward. When you make a single move you couldn't do before, it is a reward. In climbing, you are always rewarded with some small pleasures." His youth coach shared this mantra with him at a young age, and it is a lesson he tries to instill in future climbers. Because, as Jernej exclaims, "these small achievements are the reasons that stay in my mind, and why I keep on climbing." So whether it is competitions, boulders, or long routes that will hold Jernej Kruder's name in the future, we can be sure he will be chasing the enjoyment of small rewards and having fun above anything else.