With a family deeply embedded in Ukrainian climbing, there were few dull moments in Jenya's childhood. At 7-months old, she had already experienced her first climbing trip to Crimea. Soon after, she began accompanying her parents around Europe as they traveled to international competitions, which she continued to do until she entered the first grade.

Jenya recalls her childhood with joyful memories of playing outside, learning about foreign culture and languages, and being surrounded by Crimea's climbing community. Jenya also taught Serik and Nataliia the importance of being creative and adapting to situations as they mixed family time with competitive climbing careers. At times this created circumstances with more pressure than any competition could offer. One story they all look back on with a smile happened while camping in the mountains before a competition. As they packed up to leave, shortly before Nataliia had to be in isolation, they discovered Jenya had locked the keys in the car. Thankfully, with quick thinking and the help of a backpack frame-rod, Serik unlocked the car, leaving them just enough time to make isolation.

​​​​​​​
Being surrounded by the sport from infancy, Jenya had a born instinct for climbing. And while there are pictures of her at age 4 or 5 scaling rocks in Crimea, she explains that she was so young she can't actually recall how it all began. She does remember, though, lots of happy climbing memories; days of playing at the cliffs, enjoying the simplicity of climbing, and not caring about proving anything.

As Jenya grew up, Crimea became a second home to her. The community became friends and family, and it is here that her parents opened a climbing store and then later established the Red Stone climbing hostel. It is also here that her natural talent began to show. At eight years old, on her first-ever lead climb, she managed a 7a, a grade that many climbers seek out as a long-term accomplishment. Only three years later, she further highlighted her natural talent, along with the technical style and precise footwork she had refined by redpointing her two first 8a's on the same day, Vremya CH & Fiesta.

While it was never expected of Jenya to compete or even be a climber herself, as she grew up, she recalls looking up to both of her parents as athletes and being captivated in awe when they stood atop podiums. Thus, it is no surprise Jenya found her way into competition at a young age. She recalls the thrill of her first challenge at six years old when she had to ask her parents for permission to conquer a rock wall for a candy prize during the Arco Rock Junior event. Beyond this fun introduction to competing and with her parents' encouragement, she entered into competition climbing in Ukraine, at age 8, without officially counted results. When she was ten years old, the allowed age to compete in Ukraine, her career formally began.

From her parents' demonstration of having fun while competing and with an attraction to a sport that utilized her natural talent, Jenya was hooked. Beginning with her official start, she immediately showed skills with first-place finishes on both the regional and national levels. Fueled by this success and driven to progress, she spent her adolescence traveling for competitions with her parents as coaches. By the age of 13, she won her first IFSC Youth World Championship for lead in Edinburgh, Scotland, and the following year took second place for lead in Imst, Austria.

Natural talent and her family upbringing could only take her so far, though. As she explains, "once competitors came in who had a dedication to training and understood the benefit of hard work, they started to beat me. It didn't come until much later that I realized I couldn't rely on talent alone, and if I didn't start working really hard, there would be no one to blame for my losses but myself." Even with her parents' help as coaches and their emphasis on developing a strong work ethic, like many teenagers, she had to learn these lessons independently. Through this growth, she coined a motto that continues to guide and motivates her, "hard work beats talent if talent doesn't work hard," a saying that seems to be paying off. Since 2012, Jenya has stood as the undefeated Ukrainian National Champion. As an adult, to name only a few of her international accomplishments, she ranked top 10 in the Boulder World rankings in 2019 and took 4th place in the Bouldering World Championships in Hachioji, Japan, in 2019. 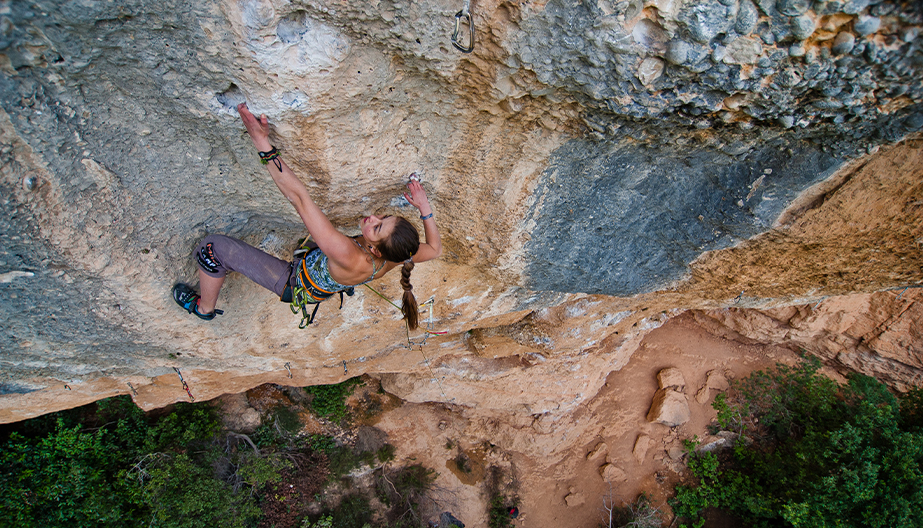 ​​​​​​​
While Kazebekova had to learn some lessons alone, she has always embraced her parent's guidance for making time to climb outside between training and competitions to allow space to reset and have fun. Crimea has stayed a central location for this, and it is here that at age 13, she climbed her first (8b+) Parallelniy Mir, and in 2017 she redpointed her first (8c+) Güllich. Her outdoor climbing isn't solely focused on the technical style on the peninsula, though. In Kalymnos, at age 15, she onsighted her first (8a+) Super Priapos. On the 55meter long route, she demonstrated a mastery in adapting to the overhanging style and managing exposure. More recently, she has displayed her talent on the unique mono-pocket style of the Frankenjura with routes Father and Son (8b+) and Queeeel dich, du Sau (8b+).

Beyond fostering athletic talent, an upbringing in climbing has given Kazebekova a valuable outlook on the importance of the community surrounding the sport. With a spark of contagious energy and a smile, she explains, "Climbers are amazing– they have special personalities and views on life. I find the community inspiring and refreshing, and the people you meet often end up being lifelong connections." This statement is showcased at competitions when she is warmly greeted by announcers, organizers, and older competitors, who are like an extended family from childhood. It is also a statement that holds true around SCARPA, as the family owners recall fondly when 5-year old Jenya visited with her parents for the first time. 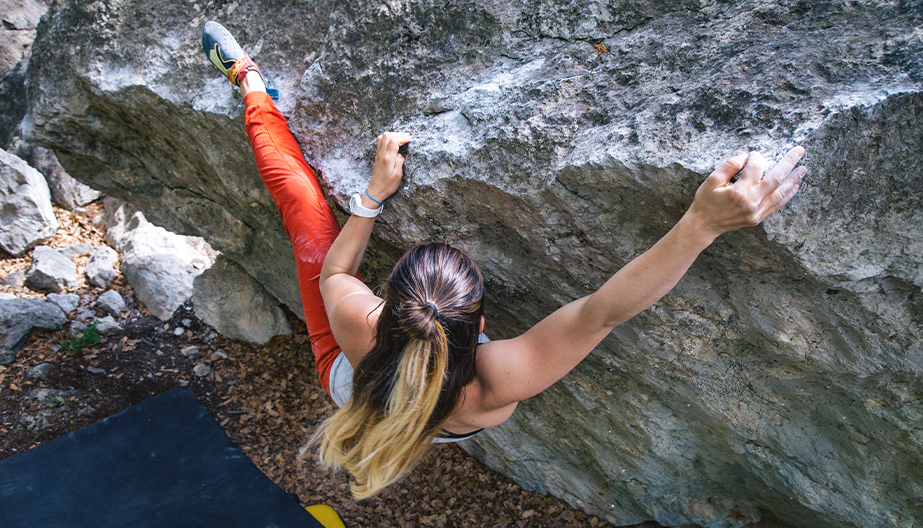 Jenya's climbing family has also taught her to step out of her comfort zone and find enjoyment in every challenge. Beyond the vertical world, she highlights this through a passion for learning languages and musical instruments. Jenya speaks fluent Ukrainian, Russian, and English and is learning French and German. She also plays the piano, guitar, and cello. Most importantly, her family has taught and encouraged her to get out and enjoy new places and experiences, no matter how difficult they may appear. She took this value to heart when she decided to move to the Frankenjura in Germany to experience a different culture and access new training facilities.

As Jenya shares the experiences and lessons rooted in her as a third-generation climber, it becomes apparent she inherited more than just strength, a drive to work hard, and the desire to learn. Being raised on climbing has engrained in her the communal aspects that we all seek out in our own climbing families; hers just happens to be a bit more literal. 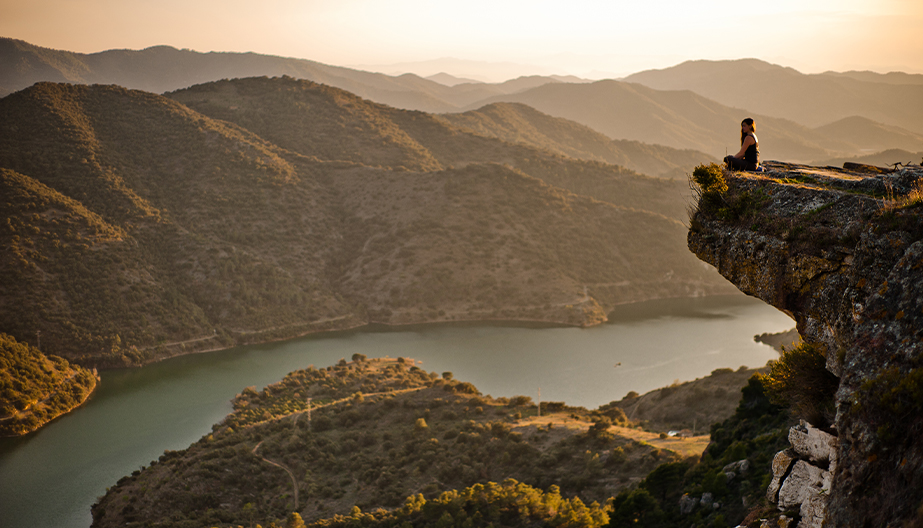