By the steepness of the wall and its thin cracks we were sure to be in for an extreme free climbing challenge, so we brought enough food and water to spend potentially ten days on the wall, but as we approached the steepest part of the wall, the cracks kept delivering incredible holds, making the climbing exceptional, but not as hard as we expected it to be. It wasn't easy either, but four days were enough for us to free the entire wall, leaving us enough food to enjoy a couple of extra days on the wall to play music, eat popcorns, and climb a few additional alternative pitches of our new route. 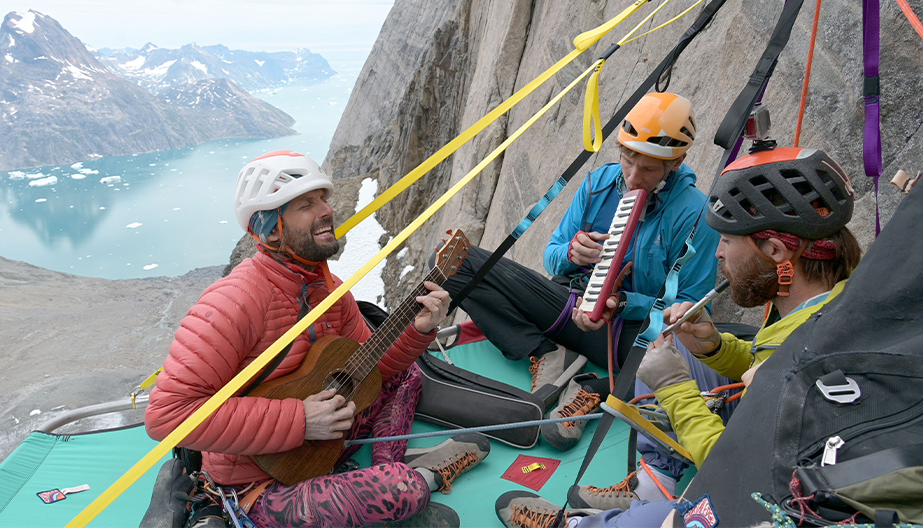 We also had the great surprise to have the visit of our friends Matteo Della Bordella, Simon Welfinger, and Sylvain Schupbach, who randomly came to the same big wall arena as us with the help of their kayaks. A few days after us, they also opened a new line next to ours, and so we celebrated the two fastest ascents of the wall with the luxury of fine wine and homemade Belgian fries! Some days later, with batteries well recharged, we split into two teams to open two new routes on a wall named Aurora. We were gladly impressed by the quality of the rock and the positive surprises any time we thought we were lost in the ocean of granite. 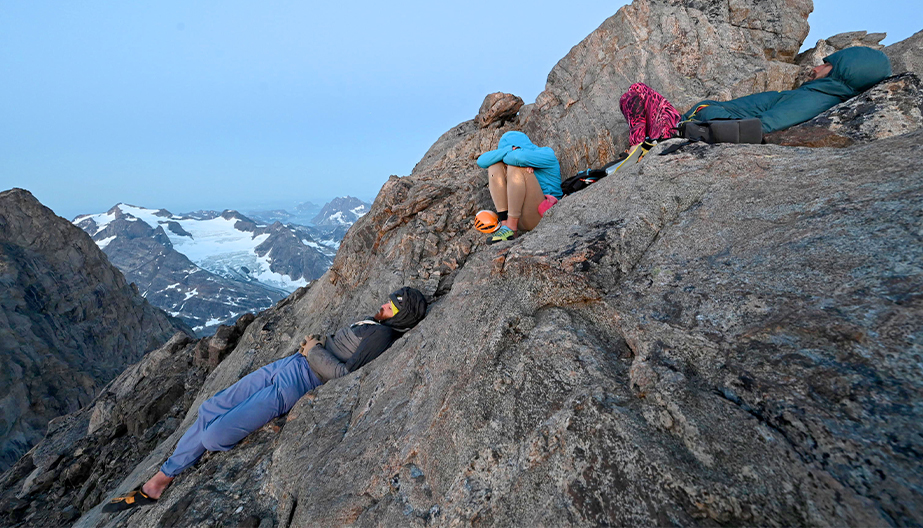 Our friends are paddling back to civilization, so we are sending the news with them, hoping they will reach you. We haven't met any polar bears or salmon yet, but we have faith in seeing them soon! We hope to climb a couple more walls here before we take our kayaks to go explore deeper. 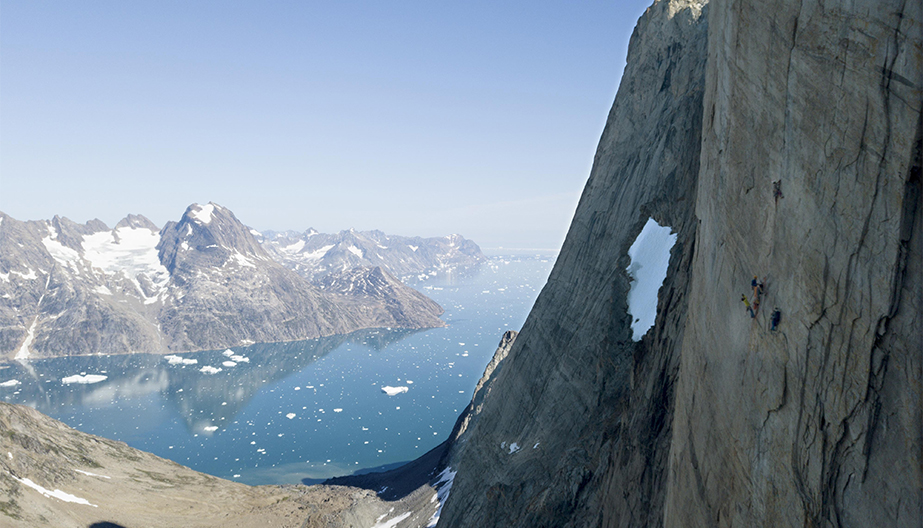 Winter is knocking on our door here in Greenland. It snowed yesterday and the sea is occasionally covered by a small layer of ice in the morning. According to Sean, the swimming conditions are getting better and better. The days are also quickly getting shorter and each climb is a bit colder than the previous one. After 45 days on our own wandering around the Kangertigtivatsiaq fjord, we were very happy to see the sailboat Kamak pop up on the horizon to bring us back to luxury and hopefully also back across the Atlantic.

Since our last update sent by kayak with our friends, we have had other visits to our camp. Maxwell and Sasha, the two foxes who visited us regularly, offered great entertainment and helped us keep our camp clean. We managed to keep pretty busy with the unlimited adventure potential of the area. Thanks to our Kayaks we could access deeper in the fjord and launch ourselves on glaciers leading to other walls. We put up 5 more climbs in alpine style on five different features around here. 4 of them were to our knowledge completely virgin providing a great level of adventure but also a unique explorational mindset.    Each time we reached a new summit, although we got a great level of satisfaction we couldn’t help ourselves from seeing walls that looked slightly nicer just a bit further, a bit like the grass looking greener in the neighbour’s garden. 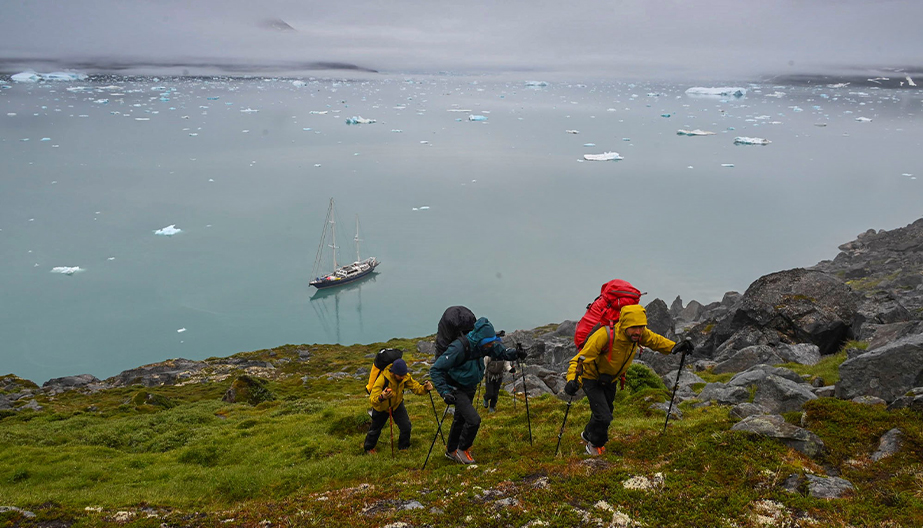 Besides his outstanding climbing skills, Aleksej impressed the whole team even more with how quickly he learnt the skill to make Belgian fries helping us recharge faster between each climb. Although Jean-Louis had planned to stick to his job as a videographer/photographer he found the inspiration to reawaken his previous climbing career and joined us with his climbing shoes on several climbs. Sean made sure to show us the way to enlightenment and not to soften up with daily meditation, Thai Chi and morning baths. And myself, as the expedition leader I had the rough task to write you these lines.

All the team is now looking forward to a stormy passage back across the Atlantic!

We made it safely back from Greenland already almost 3 weeks ago! The transition from living 3 months completely disconnected to a world at full speed has been tough but slowly we are acclimatizing back to the technology!

Anyway, the Atlantic crossing was tough as expected. We managed to get across making intermediate stops in Iceland, Scotland and Ireland in order to avoid getting caught in mean storms. Even so, we did see huge waves and shared several dishes with the fishes along the way. After such a long time at sea, the feeling of getting back on solid ground where you can run and pee on a tree feels fantastic!

Although the sailing to Greenland and back was long and petty uncomfortable, it did add a nice spice to our adventure and helped us have an appreciative mindset and contributed to having a creative mind.

During the 3 months expedition, we sailed for about 45 days and spent 45 days on land.
We managed to open 8 new routes and test the acoustics of 7 big walls in the area of Kangertitivatsiaq Fjord. After climbing 4 routes in the Mythics Cirque we used inflatable Kayaks to access other big walls deeper in the Fjord. The area of Kangertitivatsiaq Fjord is incredibly beautiful and wild and host what seems to be infinite big wall climbing possibilities. We used no bolts nor piton during the whole expedition. But we did use chalk and underwear though!

AN ORDINARY DAY FOR NICO FAVRESSE